As Ranbir Kapoor recently said “Alia is ‘one of the most important actors’ in Indian cinema”, and we couldn’t agree more. The actor has been ruling the box office with back to back hits like- “Gangubai Kathiawadi”, “Darlings” and now “Brahmastra Part One: Shiva.” By the looks of it, it is safe to say that Alia Bhatt has been on a roll.

Adding another feather to her cap, the actor has now been awarded with the prestigious “Smita Patil Memorial Award” at the 38th anniversary celebrations of Priyadarshini Academy for her commendable contribution to Indian cinema.

The actress took to her Instagram handle to share the news where she shared the certificate and wrote- “Grateful and honoured to receive the Smita Patil Memorial Award. Thank you to everyone.” 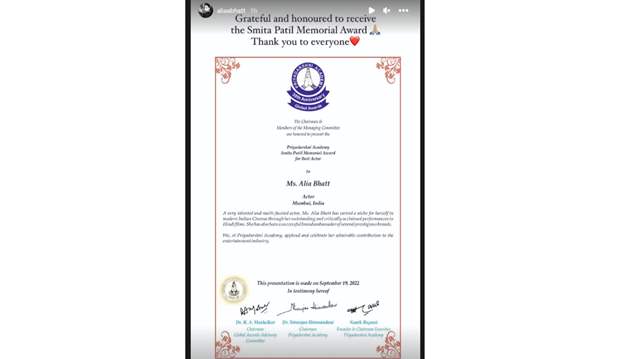 During the felicitation ceremony that was held on 19th of September, while accepting the award the actor said- “I want to thank the Priyadarshni Academy for bestowing me with the Smita Patil Memorial Award for Best Actor. It’s a tremendous honour to be here today, one I’ll cherish for the years to come.”

While her latest film helmed by Director Ayan Mukerji, has ended up becoming a blockbuster, the actor will soon be seen opposite Ranveer Singh in Karan Johar’s “Rocky Aur Rani Ki Prem Kahani”. She is also set to make her Hollywood debut opposite Gal Gadot in “Heart of Stone”.