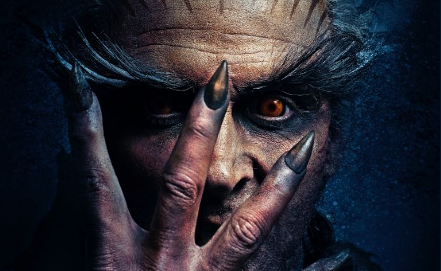 The much-awaited teaser of the sequel to our beloved Rajnikanth-starrer Enthiran has finally arrived. Expected to release this November, the movie has a sci-fi look and feel to it with a delight for VFX lovers. The Bollywood version of 2.0 is also being brought and presented by Dharma Productions. We see Chitti, the beloved robot from Enthiran in an all-new avatar combating the evil forces- this time without Aishwarya Rai by his side. Akshay Kumar broke the news of the trailer’s release on the auspicious occasion of Ganesh Chaturthi sending Twitter in a tizzy.

Akshay Kumar is also starring in the film as the key antagonist, Crow Man. Earlier, on September 9th, Akshay Kumar had shared his first look poster from the film on the occasion of his birthday. This look got fans going gaga over his intriguing look in his first Tamil debut film.

Here’s a special birthday treat for all my fans. Sharing with you my most powerful character and one which has probably stayed with me for the longest time. I am the dark superhero for those who don’t have a voice! HUMANS BEWARE!!! @2point0movie @lyca_productions @dharmamovies #2Point0

The teaser itself is a visual treat, with an interesting and unique storyline, plus our favourite stars in all-new avatars. 2.0 is what is being touted as a breakthrough film in Indian cinema, and specifically Tamil cinema, in terms of its budget and awesome VFX. The teaser of 2.0 has got us awestruck at the awesome way cinema in India is progressing. Watch the teaser and see what we mean!

Microblading: This Beauty Regime Is Like Nothing We Have Ever Seen

You Will Never Believe What BIG B Sent To Taapsee and Vicky!