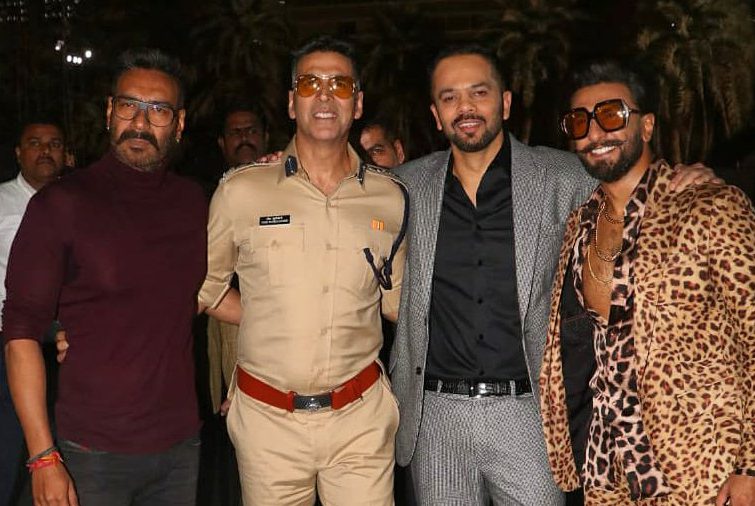 Akshay Kumar is the latest addition to Rohit Shetty’s cop-verse, as he stars in the fourth film in the ‘Singham’ franchise. A still from the film’s set has surfaced online, with Akshay Kumar in full spy gear and an entourage in tow.

Read: Ranveer Singh & Ajay Devgn To Be A Part Of Akshay Kumar’s ‘Sooryavanshi’?

The film will be set in the 1990’s, and will be unlike any other film in the Rohit Shetty’s cop universe. It is going to have Akshay Kumar as a member of the anti-terrorist squad, beating the convention of having a story centered around the police. Rohit Shetty’s caption on Instagram also hinted towards the same, as it read, “No uniforms, no marked cars. Anti-terrorism squad – the ghost department of our police force.”

This is the fourth film in the Singham franchise; the series included Singham, Singham Returns, both of which starred Ajay DevGn in lead roles. The third film was Simmba, starring Ranveer Singh.

It was at the very end of Simmba that we saw a glimpse of Akshay Kumar as inspector Veer Sooryavanshi, leading on to speculations about the film. Rohit Shetty and Karan Johar had later confirmed the fourth installment in the Singham franchise, with Katrina Kaif also starring alongside her Singh Is Kingg co-star Akshay Kumar.

Read: Katrina Kaif To Star In Rohit Shetty’s Next Film!

The cop universe just got bigger as #Sooryavanshi takes charge!

The above picture was shared by Akshay Kumar on his official handle a few days ago. He is seen sitting with the protagonists of the earlier two films, Ajay Devgn and Ranveer Singh along with the makers Rohit Shetty and Karan Johar. This picture gave rise to speculations around the fact that Devgn and Singh might be featuring alongside Akshay Kumar in a cameo in Sooryavanshi. Neena Gupta, who won hearts with her performance for Badhaai Ho last year, is reportedly going to play Akshay Kumar’s mother in the film. Sooryavanshi is slated to have an Eid 2020 release.