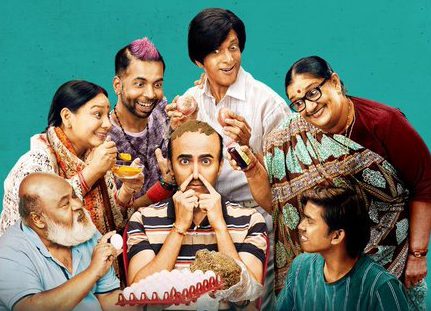 ‘Bala’ has a problem – and he isn’t shy of admitting it. But who says life has to stop at one’s problems? Bala goes after two women, serenading them in his own charming way. And that’s exactly what the film is about! Ayushmann Khurrana, Yami Gautam and Bhumi Pednekar star in this slice of life romantic comedy, and we got a glimpse of their stories in the form of a song teaser that has been released.

Read: Trailer Out! Ayushmann Khurrana As The Balding ‘Bala’ Promises A Lot Of LOLs

“If only losing love was as easy as losing hair! Or are they equally painful? Stay tuned to find out! #PyaarTohTha,” wrote Ayushmann Khurrana on Instagram. The song seems to be a painful ballad as an ode to love. In the glimpse that Ayushmann shared, we can see him taking selfies with both Yami Gautam and Bhumi Pednekar. The scenes appear and disappear, signifying the fact that they are flashbacks from the past that Bala is reminiscing upon. Yami Gautam had shared an earlier snippet from the film as well.

The film is based on the bias that Indians have towards fair-skinned girls versus dark-skinned ones. The bias is manifested in the form of Ayushmann Khurrana’s character, who chooses the fair Yami Gautam over the slightly duskier looking Bhumi Pednekar. The choice backfires on him as he faces his own set of dilemmas in the form of losing his hair and balding.

Watch the song’s official teaser below –