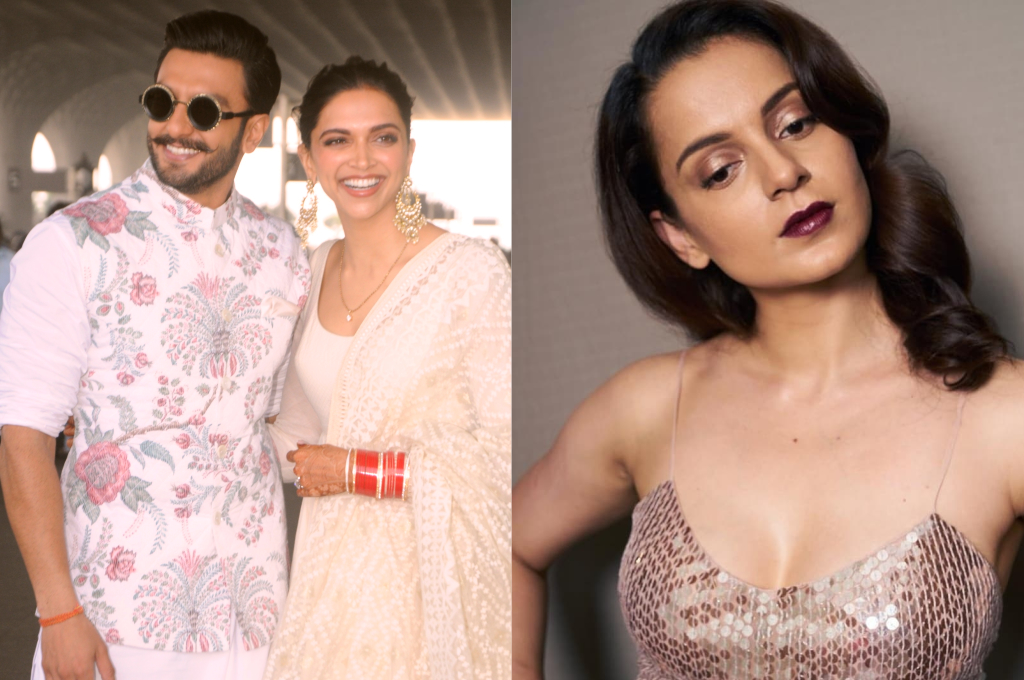 #BollyWar: Kangana Not Invited To Deep-Veer Reception? We Think We Know Why!

Far away from the maddening crowd, when Deepika Padukone married Ranveer Singh in scenic Lake Como, they grabbed headlines. From tabloids to news bulletins – everyone was a willing participant in the strictly private affair.

Once back home, the couple is all set to host not one, but two lavish receptions – one in Deepika’s hometown, Bangalore and the other in Mumbai. The guest list will obviously have the entire film fraternity in attendance, given the popularity of the couple amongst all.

It is, however, highly doubtful if one particular person has been invited to greet the newly weds. Yes, we are talking about Kangana Ranaut.

While Kangana is known to speak her mind, she does not score well on the popularity quotient when it comes to her colleagues in the industry.

The Deepika-Kangana cold war dates back to 2014, when the former was on the top of her game with back to back hits, and had scored over Kangana at the box office and awards.

Traditional never looked this fine! In all her elegance and exquisiteness, Kangana floors us with her ethnic charm. #KanganaRanaut #Ethnic #traditional

Kangana, who had proudly proclaimed she didn’t accept awards, was miffed when Deepika, in all graciousness had dedicated her award for Happy New Year, acknowledging Kangana in Queen was deserving.

Kangana Ranaut was upset that DP had not personally called and congratulated her for Queen – when Deepika extended the olive branch by inviting Kangana for the Piku party. All, however, was not well since Deepika missed the screening of Tanu weds Manu, due to the Bajirao Mastani promotions.

We're totally crushing over #Mastani's look 😍❤️ Double Tap if you are too! #MyFashLoves

The claws sheathed. Kangana, high on the success of Tanu Weds Manu and her national award bounty, cattily called “other actresses” jealous of her success, and publicly declared how she was not friends with anyone, including Deepika.

Deepika, on the other hand, maintained a dignified silence, refusing to comment on, or falling for the Kangana bait or any mud slinging.

Kangana, in the meanwhile, was on a war path with most of her colleagues, as she drew out issues of nepotism and being the victimized outsider. The industry learnt that when it came to Kangana, a diplomatic silence was a better policy than a verbal warfare.

These Are The Best Bridal Make-Up Artists In Your City