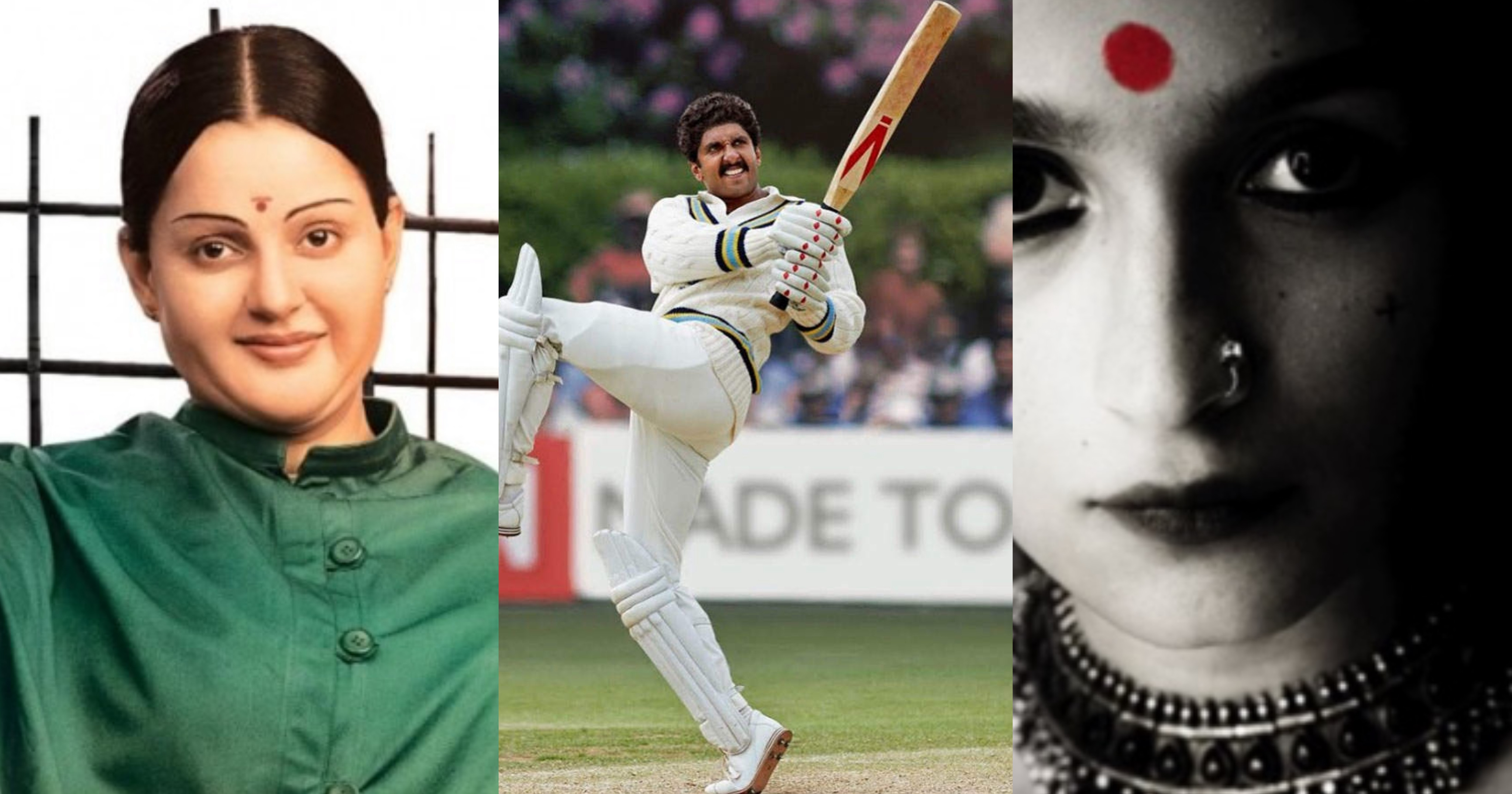 ‘Thalaivi To ‘Gangubai’: Biopics Of 2020 You Should Be Looking Forward To

Bollywood is in love with biopics and these upcoming films need to be on your watch-list!

Actor Janhvi Kapoor is all set to take a flight as Flying Officer Gunjan Saxena, who was the first woman to have received Shaurya Vir, a gallantry honour for valour, courageous action or self-sacrifice from the army.

Gunjan Saxena, along with her colleague Srividya Rajan, was part of the first female batch of 25 Indian Air Force trainee pilots in 1994. During the 1999 war, Flight Lieutenant Gunjan Saxena and Flight Lieutenant Srividya Rajan were called on duty to Kargil. From carrying out medical evacuations, dropping supplies to identifying Pakistani positions on the war zone, they did it all unarmed.

Actor Ranveer Singh will be seen stepping in the shoes of ‘Haryana Hurricane’ Kapil Dev for ’83, a film based on India’s iconic ICC World Cup win.

Alia Bhatt is set to portray the character of Gangubai Kathiawadi, who was a controversial figure from Kathiawar, India. Her life changed when her husband sold her for Rs. 500 to a brothel, forcing her into prostitution, she however rose to power through her links with the Mumbai underworld.

Titled Thalaivi in Tamil and Jaya in Hindi, the film will star Kangana Ranaut as Tamil Nadu chief minister Jayalalithaa.

Jayalalithaa, one of the most-loved politicians, was an Indian actor who turned into a representative and served five terms as the Chief Minister of Tamil Nadu, for over fourteen years between 1991 and 2016.

Vicky Kaushal will be seen essaying the role of Sardar Udham Singh, who was a revolutionary belonging to the Ghadar Party and is best known for his assassination of Michael O’ Dwyer, the former lieutenant governor of the Punjab in India.

.@akshaykumar in and as the fearless king Prithviraj Chauhan! #Prithviraj in theatres #Diwali2020
Directed by #DrChandraprakashDwivedi | @PrithvirajMovie pic.twitter.com/ZHqNDAS9mf

Akshay Kumar will soon take you on a history lesson. Prithviraj Chauhan, was one of the greatest Rajput rulers, who stood up against the invasion of Muslim rulers.

Elated and proud to announce a story never told as @ZeeStudios_ #BoneyKapoor & @freshlimefilms come together for a biopic on India’s legendary #Football coach, Syed Abdul Rahim, starring @ajaydevgn, directed by @CinemaPuraDesi, screenplay by @SaiwynQ, and dialogues by @writish. pic.twitter.com/vzaLJya67x

Ajay Devgn will be seen essaying the role of Syed Abdul Rahim who is known as the architect of modern Indian football.

Based on the life of Badminton player Saina Nehwal, Parineeti Chopra will be seen in the titular role.

Sidharth Malhotra is all set to narrate the story of  Captain Vikram Batra, who was awarded with the Param Vir Chakra, India’s highest and most prestigious award for valour, for his actions during the 1999 Kargil War.