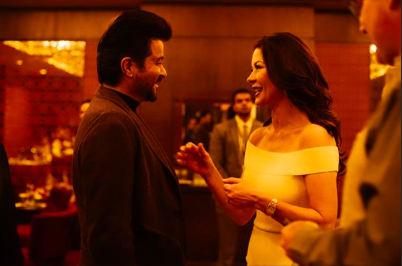 Christmas time may be around the corner, but there is more than just Christmas carols on the minds of Catherine Zeta Jones and her husband Michael Douglas. The power couple were in Delhi as guests at a recently held leadership summit. They couldn’t help but groove to Om Shanti Om’s song ‘Deewangi’, which they claimed they are obsessed with to the extent that they play the film’s songs in place of their usual Christmas musical fare! Check out the video of Catherine Zeta Jones dancing to the song with Anil Kapoor.

Here's THE moment of the day. Watching #CatherineZetaJones dancing on Om Shanti Om is like a dream for every Bollywood lover. What a sport! Joined by @AnilKapoor and #MichaelDouglas. Hindustan Times Leadership Summit.
@TheFarahKhan @iamsrk @deepikapadukone #HTLS2019 @htTweets pic.twitter.com/ZJuJed8wJp

In the discussion, Zeta Jones said that her kids have been brought up singing Om Shanti Om, to which her husband Michael Douglas confirmed, “On Christmas, everyone in our country sings Christmas carols, our house sings all the songs from Om Shanti Om.” The actress shared some pictures from the summit of her having a ‘brilliant morning, Bollywood style’.

Brilliant morning Bollywood style!! Thank you Hindustan Times and the great Anil Kapoor for a fabulous discussion. Michael and I had a wonderful time. Thank you New Dehli, until we meet again😘

“I’m a big Bollywood fan,” Zeta-Jones said, adding that she would have loved to do a typical Hindi song-and-dance film in her career. She further said that Om Shanti Om was her ‘obsession’, and she felt that it would make for a wonderful Broadway musical. Would Catherine Zeta-Jones love to star in it? ” I can’t play it because I’m not Indian,” she said regretfully. 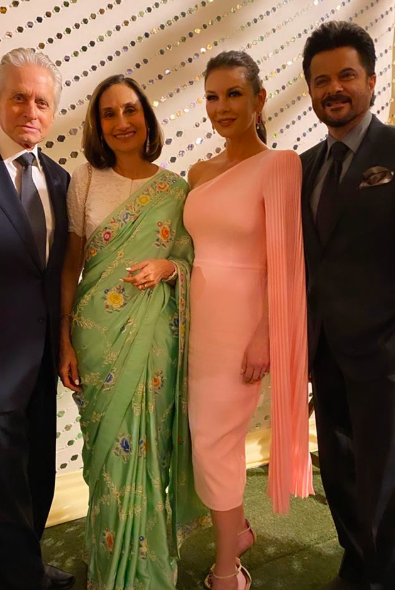 Meanwhile, Anil Kapoor made his own observation to counter her argument, as he said, “You look Indian; my niece looks like you!” much to Zeta-Jones’ elation, as she said, “I’m very honoured.” He was referring to Sanjay Kapoor’s daughter Shanaya Kapoor, who recently made her debut at the Les Bal des Debutantes in Paris. Anil Kapoor had in one of his pictures on Instagram also referred to Shanaya Kapoor as, “India’s answer to Catherine Zeta-Jones.”

“Some of the most beautiful women are from India,” Zeta-Jones agreed.