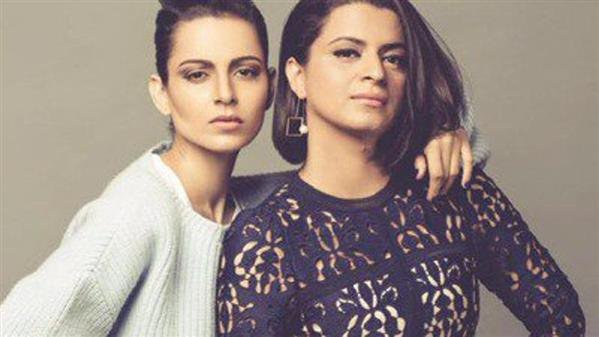 After all the hullabaloo over Kangana’s film, Mental Hai Kya releasing on the same date as Hrithik’s Super 30 – given their history of mudslinging over an alleged affair, sister Rangoli (as always) has publicly jumped to Kangana’s defence – calling him names and warning him to not ‘mess’ with the ‘Manikarnika’ actress.

My decision my film…..so all brickbats directed to me pls! I’m my own person !!! https://t.co/xRLtAzzzXN

It all started with a tweet of Mental Hai Kya producer Ekta Kapoor clarifying that the change in the date of release is purely for ‘better prospects of the film at the box-office’. This was also retweeted by Rangoli Chandel, Kangana’s sister, who later began accusing Hrithik and his PR team for spreading rumours about Kangana ‘dragging’ her war against the actor clashing with his film.

What to expect from a man who always prefers to attack your back rather then meeting you in the battle field, jitna tu aur tera PR Kangana ko giraega utna he woh teri maregi…. so far it wasn’t her concern magar ab tu dekh… Jadoo. https://t.co/D4GiBqWkbI

‘What to expect from a man who always prefers to attack your back rather then meeting you in the battlefield’, wrote Rangoli in a tweet.

She further added that Balaji is not Kangana’s production house that she can make decisions on when to release the film. Rangoli called Hrithik names and said he should now be ready to face the consequences.

Kangana told Ekta Kapoor not to release MHK on 26th but Ekta said its is her prerogative as a producer to decide the relase date, then she had a meeting with her childhood friend Hrithik and they both took this call…(contd)

Rangoli also clarified that Kangana had told Ekta Kapoor not to release the film along with that of Hrithik’s. To which Ekta said that it is her prerogative as a producer to make that decision. And that the call was taken after Ekta met with Hrithik, who is supposedly her childhood friend.

Rangoli claims that Hrithik and his PR Team are fuelling the controversy by sending anti-Kangana press releases. Hrithik and team, however, have not responded to the issue, yet.

Debut Alert! Kareena Kapoor Khan To Be Part Of A Television Show Soon