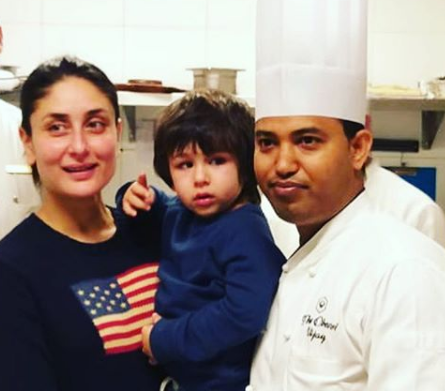 Whether or not Bollywood is his calling, baby Taimur Ali Khan is sure trying his hands at baking! Actress Kareena Kapoor Khan took Taimur Ali Khan for some cookery lessons with Chef Vijay Chauhan. These adorable pictures are proof.

Actress Kareena Kapoor Khan and her son Taimur got some lessons in making cupcakes and ice creams! In the pictures, the duo can be seen wearing white hats and matching white aprons. They even had colour-coordinated outfits, as they were twinning in blue jeans and dark blue cardigans. This is not the first time that we caught them twinning this season, as they had previously sported matching boots on the airport as well.

It was a great pleasure to meet #actress #bollywood #therealkareenakapoor and #taimuralikhan and She attend cookery sessions about ice cream and cup cakes.#taimuralikhan made yummy #icecream for his Mom.

Taimur Ali Khan even made ice cream for his mom, and looks like he had a really fun, but tiring session as he even looked a little sleepy in the pictures! Chef Vijay Chauhan shared the pictures on his Instagram handle, saying that it was a great pleasure to meet her and Taimur.

In a recent interview, Kareena Kapoor Khan had revealed how her son Taimur had become very media conscious. “Even if we want to take pictures, Taimur sometimes says ‘No photos’,” revealed Kareena Kapoor Khan. On the work front, the actress will be seen in Good Newwz alongside actors Akshay Kumar, Diljit Dosanjh and Kiara Advani. The film hits theatres on December 27, 2019.