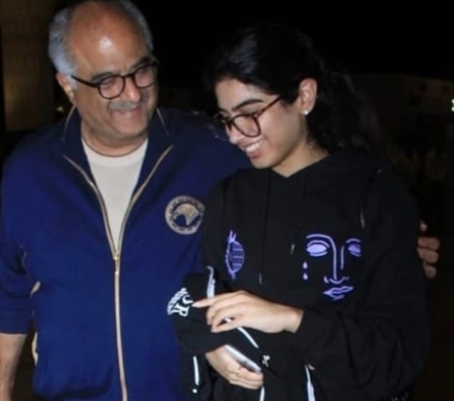 Shanaya Kapoor’s mother Maheep Kapoor took to her social media handle to share a picture of her daughter and her cousin Khushi Kapoor as she lovingly wrote “#OffToCollege ❤️ #WillMissYou 😘😘😘 @khushi05k … Don’t do anything I wouldn’t do 😉 #HaveABlast. ❤️❤️❤️😘😘❤️ 🗽🗽🗽🗽”

Fur is faux but our love isn’t 💕 #prayingfornyc

Khushi Kapoor’s aunt used a lot of Statue Of Liberty emoticons which confirm that Khushi Kapoor is indeed headed off to New York. Earlier, Janhvi Kapoor had revealed that Khushi Kapoor has enrolled for a course in the New York Film Academy and it is after she comes back that she will figure what she wants to do.

On the other hand, Shanaya Kapoor’s father Sanjay Kapoor, too, took to his social media handle to share that he will miss Khushi Kapoor.

On the work front, not so long ago, on a popular chat show, Karan Johar had revealed that he would be launching Khushi Kapoor, he said “Mizaan (Javed Jaffrey’s son) is going to be amazing, he is a potential big star and a great dancer. And Khushi perhaps, she is gorgeous and lovely.” Looks like fans will have to wait some more to see Khushi Kapoor on the silver screen.

On the other hand, Shanaya Kapoor will be beginning to work as an assistant director on an upcoming film, parents Sanjay Kapoor and Maheep Kapoor had earlier taken to Instagram to share the news.

No: The Golden Word That Can Change Your Life