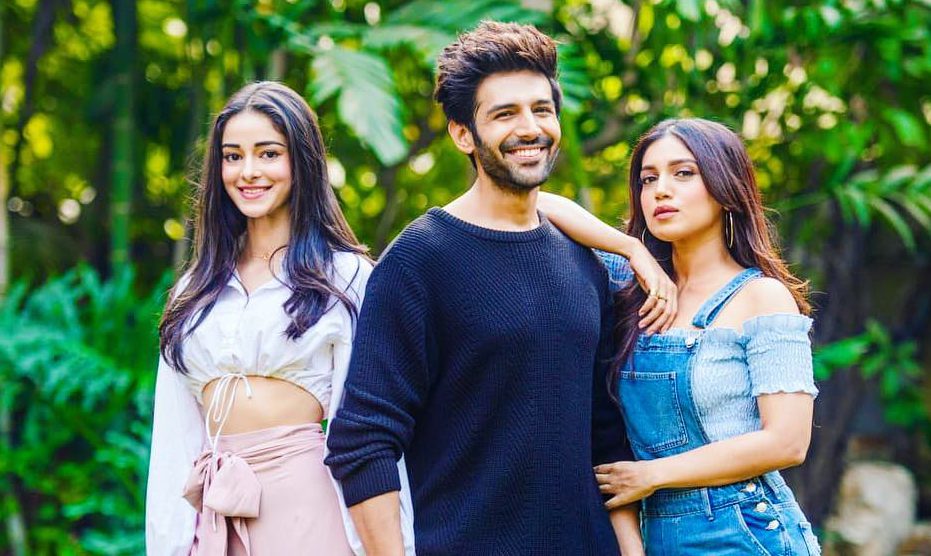 After a long wait, the first looks of the characters from ‘Pati Patni Aur Woh’ are here! ‘Pati Patni Aur Woh’ is a remake of the 1978 original film by the same name. Starring Bhumi Pednekar and Kartik Aaryan as the ‘Pati’ and ‘Patni’, the film has Ananya Panday playing the other woman or the ‘Woh’ in the film. The actors had been shooting for the film in various parts of Lucknow, and teasing and hinting at their various looks while the shooting was going on. Their first looks from the film have finally been released, and the actors released them on social media.

Bhumi Pednekar is the self-proclaimed ‘high maintenance’ wife, but only emotionally! Bhumi Pednekar was seen wearing a green sari, carrying a Physics textbook for CBSE Class XII, thereby hinting at her profession being that of a teacher. Ananya Panday’s look, on the other hand, is quite contrasting!

“Miliye Chintu Tyagi se.. Kanpur ke sabse aadarshvadi pati,” wrote Kartik Aaryan on Twitter introducing everyone to Chintu Tyagi. Although his character has an overall innocent look with a plain check shirt, riding a scooter – but the wink in the poster hinted at a new shade to his character! The poster proclaimed Kartik Aaryan to be a ‘haalaat ka shikaar’ pati, who is stuck between the ‘patni’ and the ‘woh’ in the film. Some more posters of the film were also released.

Pati Patni Aur Woh is directed by Mudassar Aziz and releases on December 6.

30 Days Of Halloween: 11 Women With The Scariest Screams In The History Of Cinema

6 Things You Can Do For Your Wife This Karva Chauth