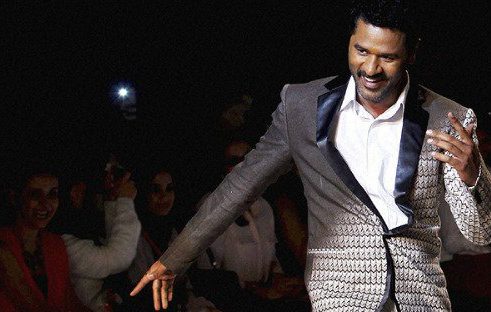 Prabhu Deva To Recreate His Iconic Moves On ‘Mukkala Muqabala’

Prabhu Deva – the actor, director, and dancer par excellence – is all set to choreograph another hit single  for the Remo D’Souza directorial ‘Street Dancer 3D’. The song is none other than Prabhu Deva’s super hit ‘Mukkala Muqabala’ from the 1994 Tamil film Kadhalan. Prabhu Deva’s iconic dance moves that are truly unmatchable have given him the status of being a pop culture icon!

And now, he will be choreographing the same song which is being remade in the contemporary context with Varun Dhawan as the lead actor. Varun Dhawan had also shared a tweet about the same, saying that Prabhu Deva will be back after 25 years and that he couldn’t wait to see the magic that Prabhu Deva would create on screen!

Back after 25 years. Can’t wait for you to see the magic @PDdancing has created. Had goosebumps while watching him now I wil be quiet 🤐 #SD3 https://t.co/VqHBeoefo6

Read: Varun & Shraddha To Do ‘Muqabla’ With Prabhu Deva’s Magic?

Street Dancer 3D brings together Varun Dhawan and Shraddha Kapoor in their third dance film together. Mukkala Muqabala, the song which was originally composed by none other than A.R. Rahman, will now be remade by Tanishk Bagchi. The remade version in Street Dancer 3D will also feature a minute-long solo performance by Prabhu Deva himself!

Meanwhile, Prabhu Deva has also taken it upon himself to direct the third instalment to the Dabangg franchise. In a recent interview, he opened up about the challenges that one faces while directing the sequel to such a huge franchise in the industry.

Challenges are there, but you have to put in hard work. People expect more. We try to give more. So, there is hard work.

Read: ‘Muqabala’ To ‘Kay Sera Sera’: How Prabhu Deva Has Made Bollywood Dance For Decades

Talking about the trend in Bollywood wherein films from the South Indian industry are being remade in the Bollywood context – Prabhu Deva feels that it has been around for years and it’s not a new trend.

Everywhere people are talented…both ways, goods things are happening. Also, it is not a new trend. Tamil films are also made from Hindi. It’s just that now because of social media, YouTube…so many people are getting to know about it.

Dabangg 3 will hit screens in December 2019 and Street Dancer will a republic day release next year. Prabhu Deva will also reportedly be making a sequel to his 2012 directorial Rowdy Rathore.

Sandra Bullock’s College Life Was Apparently So Cool, It Is Inspiring An Entire Series

Due To Decreasing TRP rate, Oscars 2020 To Be Held In Early February