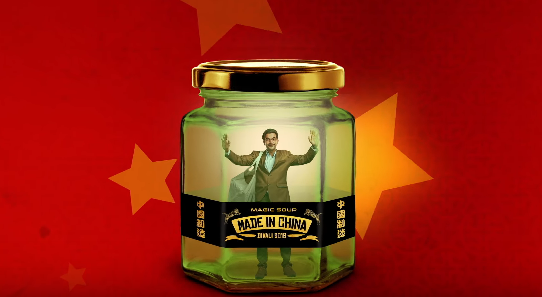 Watch Rajkummar Rao Trapped Inside A Glass Jar For His Next Film, ‘Made In China’

Diwali 2019 is set to get a ‘Chinese’ touch! The first motion poster for Rajkummar Rao’s second collaboration with Maddock Films, ‘Made In China’, has released.

Made In China is the story of a Gujarati entrepreneur Raghu Mehta and how he embarks on a fascinating business journey, replete with the Indian habit of jugaad. It is a film that has, at its core, some heartfelt relationships and the spirit of entrepreneurship. Ahead of the film’s trailer release, the makers released the film’s first motion poster –

Starring along with Rajkummar Rao are Mouni Roy, Boman Irani, Paresh Rawal, Gajraj Rao, Sumeet Vyas, and Amyra Dastur. The film is directed by Mikhil Musale and releases on Diwail 2019. Made In China will clash with Saand Ki Aankh and Housefull 4 at the box office.