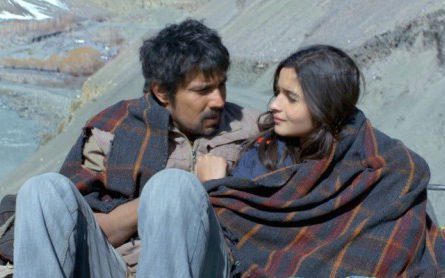 ‘Occasional actor(s)’, ‘chronic victim(s)’ were the kind of expressions used by actor Randeep Hooda, to describe people who may have had an opinion on superstar Alia Bhatt. And since the last time we checked, it was Kangana Ranaut who had mentioned having some difference of opinion with both Alia and her boyfriend – Ranbir Kapoor – speculations are rife that it is indeed the ‘Queen’ actress that Randeep is hinting towards.

Dearest @aliaa08 I’m so glad you are not letting the opinions of very occasional actors and chronic victims affect you and your work .. kudos to you for your continued efforts to outdo yourself 🤗

Tweeting out to his Highway co-star, Randeep wrote that he is ‘glad’ that she isn’t ‘letting the opinions of very occasional actors and chronic victims affect (her) and (her) work’.

‘Kudos to you for your continued efforts to outdo yourself’, Randeep Hooda added. To which Alia responded with a lovey-dovey ‘Randy’, with multiple hug emojis!

To a regular person it may have seemed like an actor encouraging another actor whom he has previously worked with, ahead of the latter’s film-release, which, in this case, is the upcoming Kalank. But to those who’ve been following B-town closely, it appeared to be a dig at Manikarnika star Kangana Ranaut, who recently expressed having some personal issues with Alia.

Kangana was reportedly upset that Alia did not come out in support of her last release, Manikarnika, nor did she attend any of the screenings of the film. After the release of Gully Boy, she had called Alia’s performance ‘mediocre’.

If that wasn’t enough, Kangana, later even went on to calling Alia’s boyfriend, actor Ranbir Kapoor ‘irresponsible’ for not commenting on politics.

Coming back to Randeep and Alia’s little public display of appreciation, Twitterati did not seem to be very pleased by what the actor had written.

‘That occasional actor got 3 national awards..how many have you got?’ asked one follower. While another decided to unfollow the Sarabjit actor.

The tweet, basically, sparked a debate of sorts on the social media platform, amongst the followers of the two actors, Alia and Randeep – both of whom haven’t responded to the speculations, yet.

6 Times Bollywood Was Inspired By The Great Charlie Chaplin