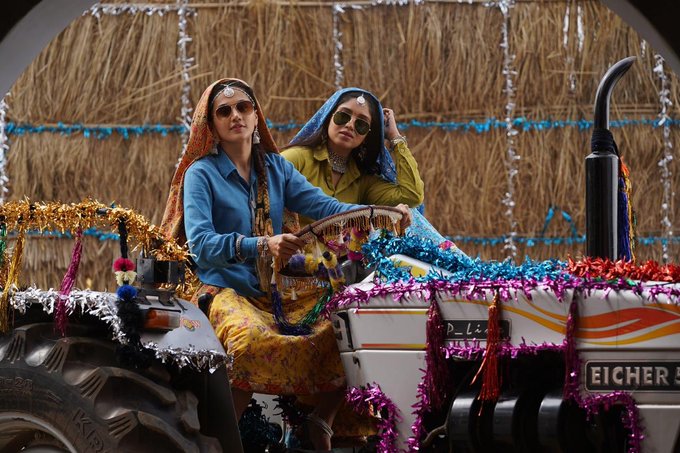 The film ‘Saand Ki Aankh’ is making waves across the internet, in a buildup to its Diwali 2019 release. The first song from the film, ‘Womaniya’, is a celebration of womanhood featuring Taapsee Pannu and Bhumi Pednekar.

1 more hour before the celebration song drops in! #Womaniya#SaandKiAankh pic.twitter.com/f1tQUms63d

Read: This Is How Taapsee Pannu And Bhumi Pednekar Celebrated National Sports Day

Interestingly, the film was earlier going to be titled Womaniya, but the makers got in a tussle over the rights to the name – which were held by Pritish Nandy. Womaniya features the two actress Taapsee Pannu and Bhumi Pednekar, but instead of them in their older looks, we see them in a much more youthful avatar. Taapsee Pannu had shared a still from the song in a build-up to it:

The song begins with a dialogue exchange between Taapsee and Bhumi, talking about the practice of nasbandi and how the government is planning a clampdown on the one activity all men love. Taapsee makes an interesting comment as she says that nasbandi should be imposed on men for their entire life, adding, “Kam se kam saans toh apni marzi se le rahe hain.” Ironically, the song has been sung by a male voice, given by Vishal Dadlani.

The song has been composed by Vishal Mishra, and its lyrics have been penned by Raj Shekhar. Lyricist Raj Shekhar said about it, “The song is a celebration of womanhood in all its glory. It is the voice, which is mostly unheard in the male-dominated society. It is a tribute to the struggles of our grandmothers, mothers et aliae.”

Listen to the song here-