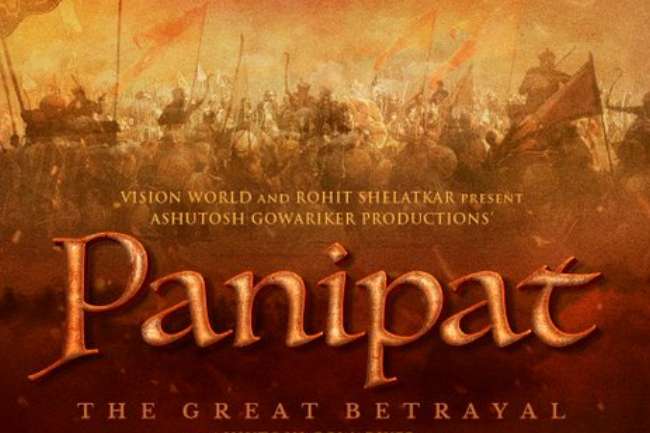 Kriti Sanon is all set to don the avatar of ‘Parvati Bai’ for her upcoming film, the first period drama of her career, ‘Panipat’. Sharing a peek of how she’s imitated the look of Sadashvirao Bhau’s second wife, not only did the actor reveal her appearance, but co-stars Sanjay Dutt and Arjun Kapoor, who’ll be seen as Ahmad Shah Abdali and Maratha warrior Sadashivrao Bhau respectively, did too!

Based on the third battle of Panipat, this film will take you on a journey.

Even Sanjay Dutt shared the new poster of the film that shows the actor as Ahmad Shah Abdali, the fierce King of Afghanistan. He wrote, “Ahmad Shah Abdali – Death strikes where his shadow falls. Panipat trailer out tomorrow. #PanipatLook.”

Wrapped up PANIPAT!! ⚔️ There is no other way of shutting him up!! Haha.. 🤣 Thank you @arjunkapoor for being such a lovely and entertaining costar!! With no ice to break, i’m glad we went on this journey together and i found an amazing friend in you!🤗❤️ And Ashu sir!! You’re the best!! Thank you so so much for giving me this opportunity and for adding so many flavors to Parvati’s character..Thank you for always hearing me out and finding her with me at every step! You create magic, and in the calmest manner ever! And I’m honored to be a part of this magic! @ashutoshgowariker @sunita.gowariker P.S. That’s literally us..always wondering!! 😜🤗❤️ @agppl

Earlier, Kriti Sanon had shared a post announcing a wrap on their shoot schedule. Arjun Kapoor for his role in the film underwent a major transformation. Teasing fans with what’s coming next, Arjun Kapoor posted a picture for his fans and followers, writing,”Warrior mode on!!!!”

Filmmaker Ashutosh Gowariker seems to be back with a bang, Panipat is slated to release on December 6, 2019.

Delhi Air Emergency: All You Need To Know About This Ongoing Public Health Crisis

5 Foods That Will Work As The Ideal Anti – Pollution Diet