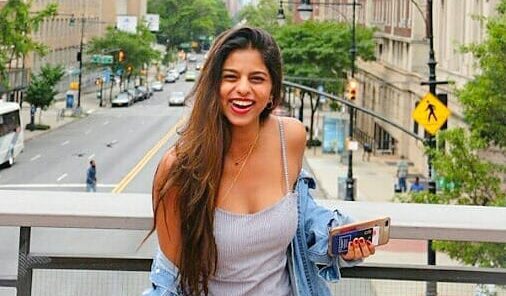 Suhana Khan recently graduated from Ardingly College in London and is currently pursuing an acting course in the United States. After performing on stage in a play, Suhana is all set to star in a classmate’s short film titled The Grey Part Of Blue.

Before sharing posters of the upcoming project on Instagram, Suhana’s classmate Theodore Gimeno had shared a few behind the scenes shots that date back to December 2018.

Wrapped up the first day of shoot for my new short film. Thank you to everyone who helped, it was a blessing❤️

In a recent interview with a leading publication, Shah Rukh Khan had spoken about how the most important part of becoming a good actor is undergoing appropriate training. He had added that if Aryan decides to be an actor, it will only be an honour for him to work with directors of that calibre. “But I think he wants to be a filmmaker”, Shah Rukh revealed. Aryan Khan is studying to be a filmmaker and a writer, while Suhana wants to be an actor.

But even if he wants to be a filmmaker, he needs to study for another five to six years and not just the literal form of studying, but probably be an assistant to Karan after he finishes his film-making course. Aisa nahi hai ki tumhara baap actor hai toh set pe aake assistant director ban jaao. Similarly, Suhana should learn acting for another three to four years if she wants to be an actor. I know many of my industry friends feel my kids should start acting tomorrow. But it’s my belief that they shouldn’t start acting yet.