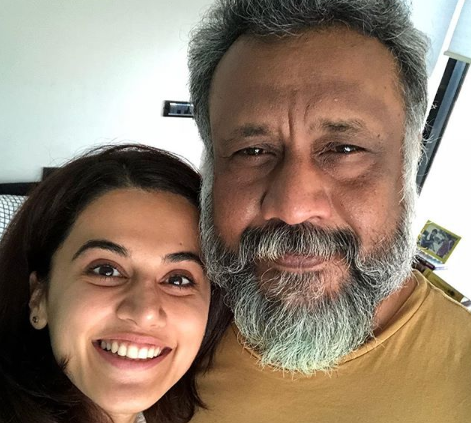 It’s no stopping Taapsee Pannu! After the success of her last ‘Mission Mangal’, she had unveiled the first look for her new sports drama ‘Rashmi Rocket’. The actress is now all set to collaborate with her ‘Mulk’ director Anubhav Sinha for a film. The actress shared a behind-the-scenes picture with the director, announcing the new project.

It’s time again…. This one is something that was brewing in all our hearts for years…. ❤️❤️❤️ Using the power cinema has given us to voice what needs to be addressed 🦹🏽‍♀️

Read: After Ayushmann’s ‘Article 15’, Anubhav Sinha Is All Set For ‘Thappad’ With Taapsee Pannu

“It’s time again… This one is something that was brewing in all our hearts for years… Using the power cinema has given us to voice what needs to be addressed,” wrote Taapsee Pannu in her Instagram post. The film is touted to be a socially-driven film, which the actress hinted at by saying that they would use the ‘power’ of cinema to give a ‘voice’ to what needs to be addressed. Anubhav Sinha too posted on Twitter about his eleventh film, talking about eleven being an auspicious number and dedicating the project to the women of India. The film is slated to release on the occasion of Women’s Day, 2020 i.e. on March 6. Filmmaker Anubhav Sinha posted a picture of the duo which seems to have been taken at the film’s mahurat.

This year let’s make it even HAPPIER women’s Day!

See you all ladies along with your men in theatres on 6th of March 2020@anubhavsinha @itsBhushanKumar https://t.co/6aZwA5x1nL

Taapsee Pannu urged all the ladies to be in theatres on the same day, with their men to watch the film. The actress had hinted in July, that there would be a film with the Article 15 director soon.

Cheers to the new beginning with some good food! This one is a subject way too close to my heart. I’ve been wanting to do this since years. It becomes exciting when it happens with the ‘Man of The Moment’ @anubhavsinha
8th March 2020 will surely be the day to watch out for ! pic.twitter.com/2ynuW6jmGF

Read: After ‘Mission Mangal’, Taapsee Pannu All Set To Play ‘Rocket’ In Her Next

The actress will also be seen in Saand Ki Aankh alongside Bhumi Pednekar, which is slated to release on Diwali 2019.