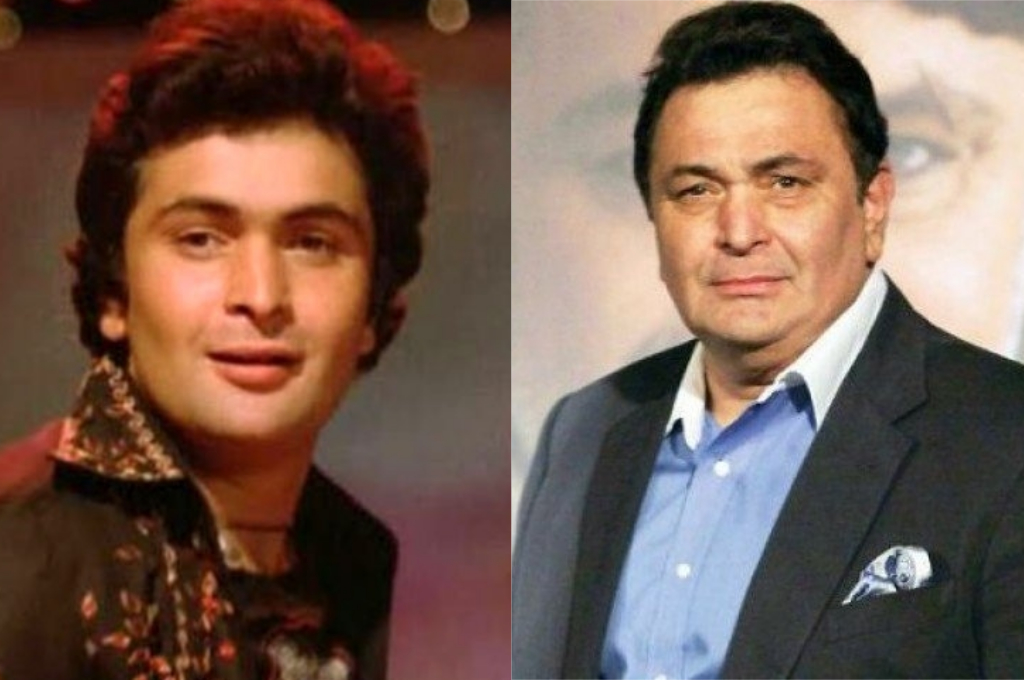 Just the other day, listening to the rain, I sat with my coffee and hummed, ‘Kya mausum hai, aye deewaane dil, chal kahin durr nikal jaayein’, and whenever I wanted to chase the blues away, all I had to do was put on the 10-minute medley from ‘Hum Kissi Se Kam Nahi’, ‘Jane Ada Tujh Pe Main Fida’, and my feet moved along to the rhythm of the beats – after all, who didn’t try emulating Rishi Kapoor’s smooth footwork? 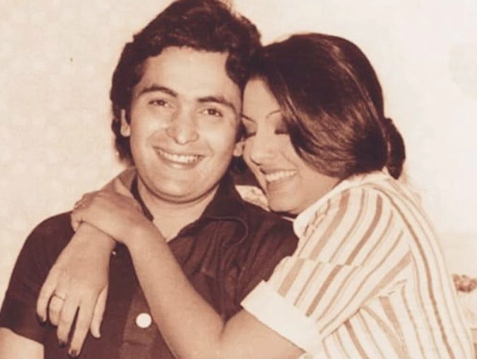 As a star-struck pre-teen growing up in Bombay in the early 70’s, Rishi Kapoor and Neetu Singh were my favourite cine couple of all time, and that’s something which has remained unchanged, so all the social etiquettes journalists need to follow be damned, I gushed as a fan girl when I met both him and Neetu Kapoor together, years later. “I am your biggest fan ever!”, I said, as they both smiled. A few years later, he told me he could be an ‘obnoxious brat’, especially with his wife Neetu, he said ‘I may have given her a hard time during our courtship days’. But their love story is what tinsel romances are made of.

Known to speak his mind, Rishi Kapoor was fearless, he was also jovial and lived life king size, but could cut you down to size, if you crossed the line of decorum. 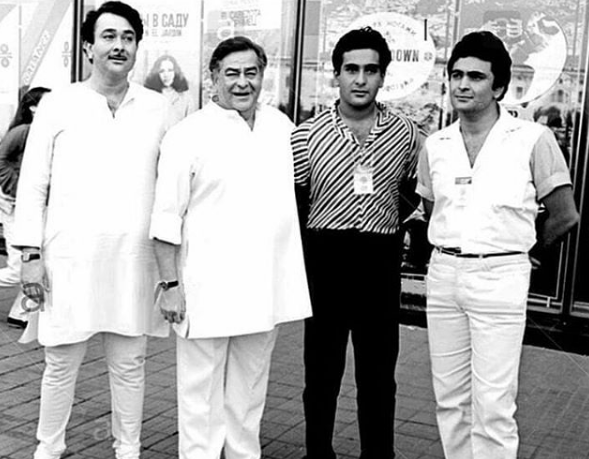 So when I was given the opportunity to interview him for a show called Flashback, a senior producer tried to forewarn me that Mr Kapoor can be difficult. But he was none of that, on the contrary, he was fun, charming and more than happy to entertain me with stories, he caught my surprise saying “you have done your research well, the other day someone told me ‘your brother Shammi Kapoor’ and I had to tell the person off that he is my Chacha, not brother!”

Stories of being bribed by Nargis with chocolates on the sets of Shri 420, to giving a shot in the iconic song Pyaar Hua Ikrar Hua, he said with a twinkle in his eyes, ‘my starry tantrums began early’, he laughed aloud.

So from practising his autograph when his father Raj Kapoor decided to cast him as a fifteen-year-old to play a young him in Mera Naam Joker, he told me his debut film as hero Bobby, happened by default , “Mera Naam Joker had financially drained my father, and he was like why do I go through the ‘siyappa’ of finding a hero, let me take Rishi and anyways the real hero of the film was Dimple, Bobby was her story, but it’s just that Dimple married soon after, and all the stardom came to me, so I became a star by default”. 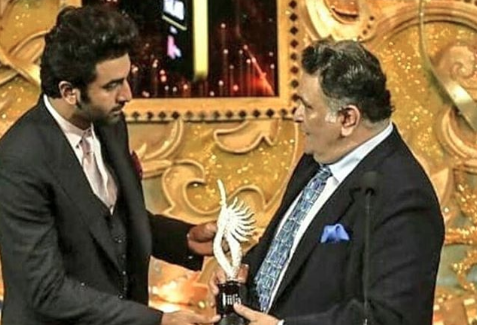 Stories of how films were a collective collaboration in the days gone by, how his father would show him how to enact a scene, to sitting with the composer to get the song mood right, these days “there is just no shelf life of songs”. The first family of Hindi Cinema, the Kapoor legacy is enshrined in the cinematic hall of fame, when I asked him about his son Ranbir telling me that he was his worst critic, Rishi Kapoor was candid. “I will be honest, not because he is my son, but I have never quite liked his films, so I have stopped seeing his films, because if I see his film and if I say something wrong then my wife fights with me and we get into an argument and things get ugly. But when I saw Sanju, I was in Mauritius and was six to seven champagne glasses too high and like the flight was cruising high, I told him, you have done well. He worked hard for that film and his director helped, so I am proud of him”.

Ranbir often joked and told me “How have you hit off with my father? Main to a bahut darr ta hun, he anyways only loves three things in life, his wife, his whiskey and his dogs”. 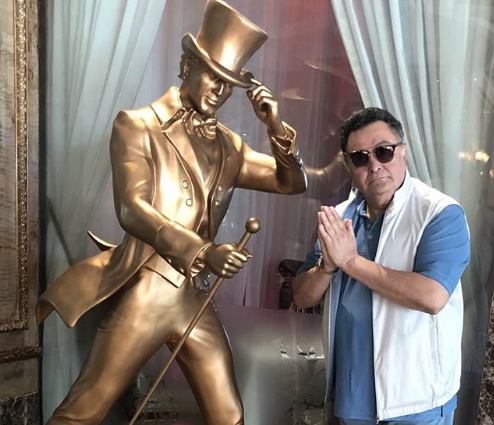 Taapsee Pannu joked saying “He is a hard core hot blooded Punjabi and he loves being a bully”,Rishi Kapoor with a twinkle in his eyes indulged me and her saying “Look at these two ganging up against me, main andolan karunga, bad se badnam bura”.

A man who was vocal on his twitter timeline, be it asking for the ‘thekas’ selling liquor to open during lockdown to shutting trolls who tried to take him on for food choices or political matters, he didn’t shy away from saying things the way they were. “Everyone has the right to express their views he said, and I am a common man, tax payer, I can express what I feel and debate”.

So it was him as Monty the singer in the reincarnation drama Karz, who made you dance along to Yeh Paisa Hai Paisa or Om Shanti Om or Dard-e-Dil. He was the poster boy of teen romances – Ek Main Aur Ek Tu, Khel Khel Main, or an older woman’s obsession in Doosra Aadmi. The man who defies society to marry a widow in Prem Rog, from multi-starrers like Kabhi Kabhi to Amar Akbar Anthony to Naseeb, very often seen as the younger sibling of Amitabh Bachchan, Rishi Kapoor told me, “Then the audience was so forgiving, imagine in Amar Akbar Anthony, three brothers collectively donating blood to their mother, agar Ranbir kare aisa kisi film mein, log bolenge are jaa”, the same thing reiterated by his colleague Amitabh Bachchan who reminisced about their four decade long friendship and said “Three brothers are singing, “Ek Jagah Jab Jama Ho Teeno, Amar Akbar Anthony, and the villain does not know”, the innocence of a time gone by. 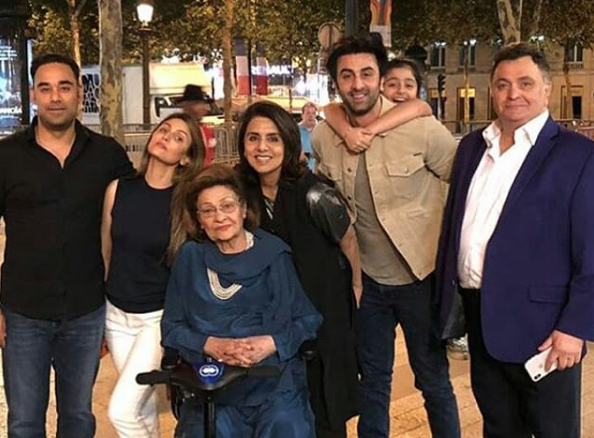 With the advent of the angry young man, Rishi Kapoor was the typical romantic hero on screen, the late 80’s and early 90’s from Chandni to Bol Radha Bol to Deewana, he continued to serenade his heroines, but the late 90’s saga was a brief lull.

However, the actor was back in films such as D Day, Do Dooni Chaar, Agneepath, Kapoor & Sons, Mulk, showcasing different characters – from shades of grey as a menacing villain to a gregarious grandfather, to a father fighting the system, he was enjoying what he called his “second innings”. Characters are being written, people want you and it’s also fulfilling for me as an actor, ab kabhi takes will you be doing 1,2,3,4 to the count of the dance master”. 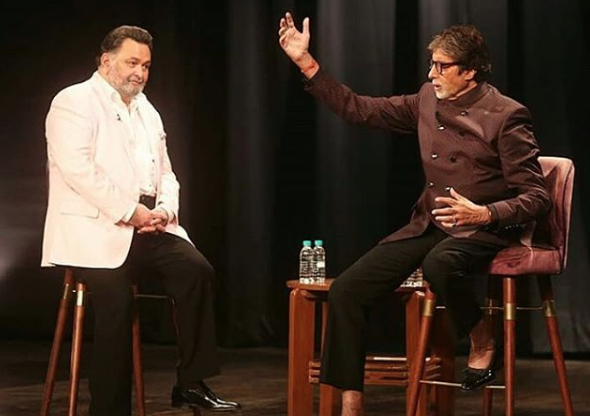 A man who always took time to respond to messages promptly, whether it be birthday greetings or a time when I sent him video from Tel Aviv, from a cafe playing Dard-e-Dil, he wrote back saying “Thank you, In London and now, off to the US for a much needed vacation”.

When he was unwell, I enquired about his health, he wrote back with an update, these messages I shall keep with me.

It was pleasure knowing you Mr Kapoor, you were as entertaining on screen as you were off it, and I am sure the heavens are dancing to your tunes, as in the words of your father “the show must go on”. Cheers to you and thank you for the memories which remain as timeless as you.

Mumbai To Berlin To Cannes To Venice: Film Festivals Around World Come Together Amid COVID 19

‘Sorry We All Couldn’t Say Bye’: Bollywood Mourns The Death Of Rishi Kapoor