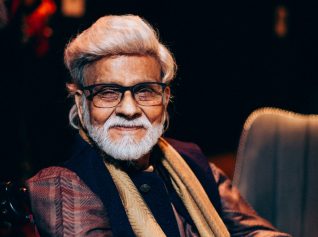 “That who is stationary cannot be creative”, Satish Gujral.

It’s the end of an era, eminent artist Satish Gujral, known for his versatility across mediums, passed away at his New Delhi residence on Thursday after a prolonged illness. He was 94 years old.

One of the pioneers of Contemporary Indian Art, Mr Gujral was a painter, muralist, sculptor, architect, interior and graphic designer known for his experiments across mediums, as in his own words, “all my life I have changed styles and mediums”, adding that he “disliked doing the same thing over and over again”.

Born in Jhelum in pre-partitioned Punjab, on Dec 25, 1925, he lost his hearing after an accident at age 8, and though turned away from educational institutions due to his impairment, “my handicap made me a butt of ridicule wherever I went”, in his book the World of Satish Gujral.

Art became a channel through which he could depict his own anxiety and the suffering he saw around him, his initial from 1947 highlighted the anguish and agony of the Partition of the subcontinent.

His disability and passion for art connected him to the Mexican Painter Frida Kahlo and he apprenticed as a muralist under her husband Diego Rivera in the 1950’s. Mexican artists who took inspiration from the revolution and were known to experiment with mediums, resonated with him.

An artist, who didn’t let his creativity restrict him said, every time I did something new I would lose patrons or admirers, but then I have never created or painted for anyone, I do it for myself.

His design for the Belgium Embassy was selected by the International forum of architects as one of the finest buildings of the 20th century. His alphabet mural on the outside of the Delhi High court is something most are familiar with.

Tributes poured in, PM Narendra Modi in a tweet described him as multifaceted and applauded his determination to overcome his adversity.

Satish Gujral Ji was versatile and multifaceted. He was admired for his creativity as well as the determination with which he overcame adversity. His intellectual thirst took him far and wide yet he remained attached with his roots. Saddened by his demise. Om Shanti.

Just heard the sad news of Satish Gujral's passing. Unlike many of his peers, who went to Paris or London in the early 1950s, Gujral went to Mexico City to study with Diego Rivera and Siqueiros. Gujral's was a versatile practice spanning painting, sculpture and architecture. RIP. pic.twitter.com/kRtIjUpJWt

Satish Gujral was awarded the second highest civil honour the Padma Vibhushan in 1999, a documentary on him a Brush With Life was released in 2012, based on his autobiography by the same name.