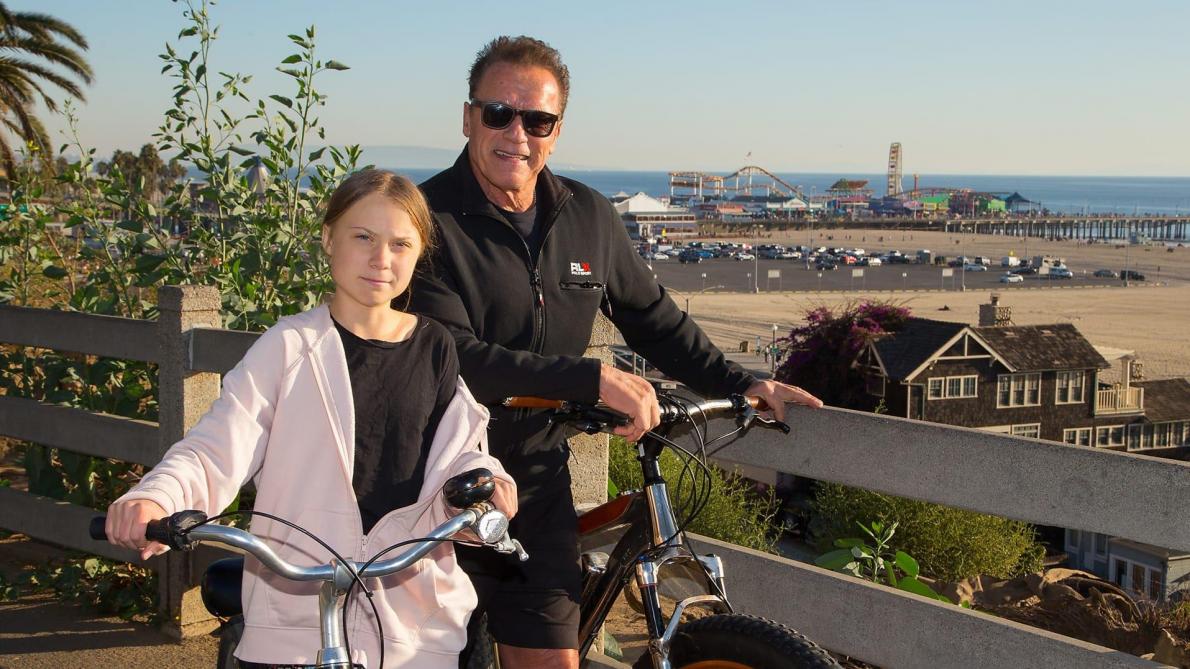 After Hanging Out With DiCaprio, Greta Thunberg Goes Cycling With Schwarzenegger

Greta Thunberg is a force to reckon with; she is the hero of all other heroes. The 16-year-old is hell-bent to bring in changes to help our Mother Earth. And the latest heavy-hitter to be influenced by this teenager is none other than the Terminator himself Arnold Schwarzenegger.

It was fantastic to see my friend and one of my heroes @gretathunberg last week and go on a bike ride around Santa Monica together and I was so pumped to introduce her to my daughter Christina. Keep inspiring, Greta!

The 72-year-old Hollywood icon took to Instagram and posted a series of photos with Thunberg as they went for a bike ride together around Santa Monica, California. Schwarzenegger called Thunberg his hero as he wrote in the post, “It was fantastic to see my friend and one of my heroes @GretaThunberg last week and go on a bike ride around Santa Monica together and I was so pumped to introduce her to my daughter Christina. Keep inspiring, Greta!” The duo was joined by the actor’s daughter, Christina, and Thunberg’s father, Svante.

According to reports, Schwarzenegger even offered to loan Thunberg his custom-designed electric Hummer so that Thunberg could travel to Canada for a climate change rally in Montreal, while cutting down on her carbon footprint. She, however, did not end up accepting the offer, but Schwarzenegger did set her up with a Tesla Model 3 for the trip which is also completely electric and in fact, more practical than the oversized Hummer.

Greta Thunberg’s meeting with Arnold Schwarzenegger came just a day after meeting actor and environmentalist Leonardo DiCaprio who described her as “a leader of our time”. DiCaprio took to Instagram and said it was an “honour” to meet with Thunberg and that he is “optimistic about what the future holds” thanks to young activists like her.

There are few times in human history where voices are amplified at such pivotal moments and in such transformational ways – but @GretaThunberg has become a leader of our time. History will judge us for what we do today to help guarantee that future generations can enjoy the same livable planet that we have so clearly taken for granted. I hope that Greta’s message is a wake-up call to world leaders everywhere that the time for inaction is over. It is because of Greta, and young activists everywhere that I am optimistic about what the future holds. It was an honor to spend time with Greta. She and I have made a commitment to support one another, in hopes of securing a brighter future for our planet. #FridaysforFuture #ClimateStrike @fridaysforfuture