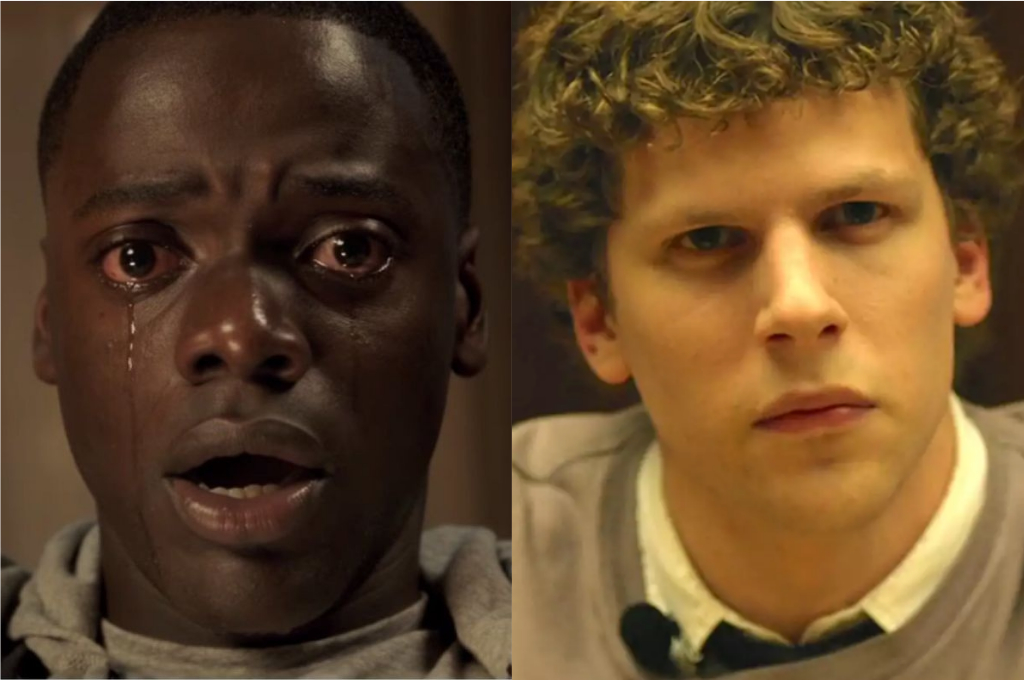 In order to decide the best movies of the past decade, our Hollywood team slaved over understanding exactly what makes a good movie, or what makes a spectacular movie in a sea of movies that left us enthralled, haunted, and every intense feeling in between. Whether the movie was iconic, whether historic, whether refreshing, whether fierce – the true singular motif this past decade was how inclusive the movies were. We had brown actors as romantic leads, we had black actors playing superheroes, we had mainstream blonde – blue eyed – white alpha male-esques playing one half of a tormented homosexual love story, we had one of the most avant garde horror stories being made. The past decade was riddled with independent cinema that was exquisite, but also punctuated by movies that included masters of the game. From creepy soundtracks, to eclectic characters, to screenplays and cinematography that could launch a thousand celestial dreams – these movies changed the way we looked at cinema. As hard as it was to forego Christopher Nolan’s cinematic prowess, or Cate Blanchett’s delicious performance in Carol, to the masterpiece that was Spiderverse, Her, American Hustle, Gone Girl – so on and so forth, we realized that encapsulating a decade this good means that the 10 movies we choose offer that singular brilliance that spoke to us with a message of the world evolving, in the most transformative manner.

“In times of crisis, the wise build bridges while the foolish build barriers.”

This movie was unlike anything viewers had seen before. While it retained the familiar territory of the established Avengers, Black Panther introduced an entirely different side of the Marvel Cinematic Universe. Most tellingly, the movie has gained plaudits for its vibrant and culturally dynamic depiction of the imaginary African kingdom of Wakanda, portraying a wonderful blend of tradition and highly advanced technology. The movie wasn’t limited to just the concept of inclusivity, but also demonstrated that normative ideas seared through the pop-culture of the past need not be invoked to be a superhero in the true sense of the word. In fact, in terms of his personality, Black Panther is perhaps one of the most complete individuals and brings a highly refreshing paragon of sensibility. The movie, with its nuanced character portrayals and its brilliant visuals, makes for one of the most inimitable cinematic superhero experiences of the decade.

Greta Gerwig is a name who dominated the entire decade with stories so evocative and portrayals so effective, that you couldn’t help but be besotted by her body of work. Whether when co-writing and performing in Frances Ha with her real-life partner Noah Baumbach, or it was ending the decade with something as beautiful as Little Women – the decade was Gerwig’s and the biggest testament lay in her directorial debut, Lady Bird. With a cast that boasted of Saoirse Ronan and her steely gullibility and effervescent bravery, to Laurie MetCalf’s principled maternal stubbornness, the movie traverses the coming-of-age of the girl “Lady Bird” and her fractured sense of self riddled with her even more fractured relationship with her mother, in a boiling pot of financial woes, love troubles. The movie is written exquisitely, the ideas spoken of penetrating the viewers with regret and hollowness. This movie is transparent in its intentions, and predictable in ways of how the climax approaches us, however it’s the moments of vulnerability so perfectly portrayed by both Ronan and MetCalf that make us realize how rebellion is almost always in a co-dependent relationship with regret!

“That’s why they call it love.”

Kumail Nanjiani’s autobiographical love story is on the face of it a very typical hipster indie love story, and Zoe Kazan’s presence just further works up that idea, however the movie tugs at heartstrings, and how! Much like a typical tragic and sappy love story, but it isn’t the love story between Nanjiani and Kazan, but instead about the former dealing with a life with the latter’s life, her parents, his parents, and ultimately his identity. The movie talks about accepting and embracing a love that is real and difficult. The movie walks the frequent path of the cultural squabbles an inter-race couple often goes through, but then Kazan’s character is suddenly invalid, making Nanjiani’s whole idea about love and companionship change drastically. Between his orthodox South Asian parents, his partner’s illness, his awkward yet becoming relationship with said partner’s parents – The Big Sick gave birth to a rom-com that was completely and utterly unique because it was not typically ideal and still gave us a happy ending!

Was there anything creepier than the Radiohead song Creepy that defines the entirety of this movie? Why yes, it is everything Facebook has ever done in real life ever since its inception. The movie’s portrayal of Mark Zuckerberg, done so flawlessly by Jesse Eisenberg, coupled with all the hearings we have seen him in since makes us believe that Facebook might as well have been a scorned lover’s deepest vengeance. The screenplay, the original soundtrack, the awkwardness of Eisenberg, the repartee during the legal negotiations, the idea thefts, the overarching role-models, the last scene of the movie, the quick paced fateful conversations. The list of the best movies of the decade are just not complete by the insidious and dark undercurrents of art, cinema, real life, as shown by The Social Network.

“Everyone is a moon, and has a dark side which he never shows to anybody”

Barry Jenkins’ sprawling look at romantic desire and the emotional hardships of the African-American community folds its fixations into a profound creative tapestry. On one level, it’s a deep tragedy told in passing glances but simultaneously it’s also a rallying call that broadens the potential for black artistry to permeate popular culture in fresh ways. Moonlight explores the plight of a young black man across three eras of life, searching for his place in the world while struggling with his sexual identity under the burdens of society and a broken family. The tale of young Chiron, as he grows up and misses his opportunity to find a satisfying life, gets more desperate and mournful as it moves along. Finally, the boy becomes a man as he attempts one last shot at setting things right. Even though the tone is somber, it’s a beacon of hope for the prospects of speaking up, reflecting the mixture of despair and yearning at the center of our troubled times. Its final image, of young Chiron gazing at the camera from the nighttime beach where his true self will always linger, is nothing short of iconic.

“I know there’s things you cannot tell people. But I also know there’s a story here people will hear about it.”

Is there anything mightier than the power of ink, power of the written word? In a decade of hurried breaking news, the movie Spotlight brought the focus back on the essence of journalism. The unravelling of layers of superficiality to land to the murky truth, and bringing it to the people, the citizens who are the stakeholders of what goes on in the country. Spotlight, based on a true story, is about exposing paedophilia and child abuse that runs rampant in the closed religious doors of the clergy. The investigative wing of The Boston Globe puts their focus, their time, their limited resource in bringing the truth to people, so vulnerable and so fragile from seeing the truth behind the messengers of God. The movie makes you believe in the power of storytelling, the power of truth, the power of journalism, and the power of using cinema as a medium to shed light on the realities of the world.

“Call me by your name and I’ll call you by mine.”

Is this the love story of the decade? The tragic and doomed love between Elio and Oliver that makes us become a human burrito and erupt in tears without a moment’s respite? With the supporting cast of the beautiful Crema, the wilderness of the countryside, the 80s aesthetic of a sun-stroked palette, the movie is an enigma. Coupled with Sufjan Stevens’ brilliant score, the movie will pierce your heart so strikingly, that you won’t be able to breathe. The movie looks at two very mainstream actors, much like Brokeback Mountain had years ago, takes the same motif of pain and prohibition and then adds a doozy of understanding parents but a world full of tepid unsurity addled with the ache of unrequited love, and gives you the most devastating love story of the entire decade.

“Charlie’s going to dig you”

Once Upon a Time…in Hollywood is set in the year and place of the Manson murders-Los Angeles, 1969. The story of Rick Dalton (Leonardo DiCaprio) and Cliff Booth (Brad Pitt) living and working in Hollywood ahead of the night Charlie Manson sent his cult to murder Sharon Tate (Margot Robbie) is funny, sad, beautiful, painful, poignant and slapstick. Once Upon a Time…in Hollywood is objectively well shot; it flows, it is lush, the detail is startling and for that reason, it is Quentin Tarantino’s best, bravest and most confrontationally impudent movie since Pulp Fiction.

“Fair skin has been in favor for, what, the past hundreds of years. But, now the pendulum has swung back. Black is in fashion!”

Well, well, well – Jordan Peele probably had no idea what he was unleashing when he decided to make Get Out. Not only did it redefine the way we look at horror, but it also changed the way we look at race, at woke people, and a little bit how we look at love and family. Based around the most eccentric storylines ever, Get Out, like Children of the Corn and The Boys From Brazil had an illegitimate child and sprinkled it with some millennial dynamism, to bring about a slew of people who are non-automaton slaves stuck in a time warp, hypnotized against their will, feeding into generations, controlled by whites in the most disgusting yet tingling method. The movie shocks you into submission, making life imitate art in a way few horror movies can, and this is just a summary of the torment Get Out is all about!

“We may have our differences, but nothing’s more important than family”

Coco is a story that literally everybody can relate to, despite that the fact that it is so heavily steeped in Mexican culture. The Lee Unkrich directorial presents death as a life-affirming inevitability; its story line about grudges and abandonment makes you feel less alone. Coco makes you seriously evaluate the ties you have with your family and how their love is one thing that transcends everything else on Earth. For that reason, the film managed to take the notion of “family comes first” in a completely transcendent way- just because family comes first, it doesn’t mean that it gets in the way of other things. By the end of the film, 12-year-old Miguel managed to find a way to balance both his dreams of becoming a musician and the love that he has for his family- he didn’t have to choose one over the other after all.

Disclaimer: These choices are significantly personal of the author, and in no way are a blanket statement regarding the cinema of the past decade.

1 thought on “Black Panther To The Social Network, These Are The 10 Best Hollywood Movies Of The Decade”