Indian Cricket Captain Virat Kohli was spotted hanging out with wife Anushka Sharma at Bond Street, London – as shared by a fan page of the Indian skipper.

Anushka Sharma, too, posted a story on her Instagram profile – that was a video of her showing a cat who joined her for breakfast. She had tagged London as the location on the story. According to sources, she is in town for a brand shoot before she heads to Brussels for further work commitments.

It is also being speculated that the actress is in England for the upcoming India Vs Afghanistan match, that is scheduled to take place in Southampton on June 22. Virat Kohli reportedly took a day off, and went to London to meet Anushka Sharma before he heads to Southampton for the next league match in the ICC World Cup.

The official BCCI policy for wifes of cricketers states that family members may stay for a period of 15 days with the respective cricketers. 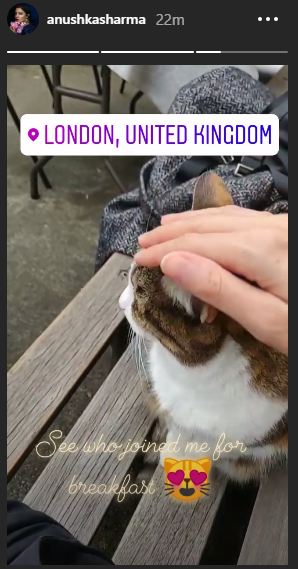 Will we see Anushka Sharma cheering in the stands for hubby Virat Kohli? Or was this just a quick meeting before they head in separate directions for their own commitments? Well, our guess is only as good as yours!

In The Month Of Pride, Indians Believe That Love Is Indeed Love

11 Hollywood Movies That Are A Must- Watch For Music Lovers

Anushka Sharma Writes A Poem On Her Birthday, Wishes For ‘All This To End’