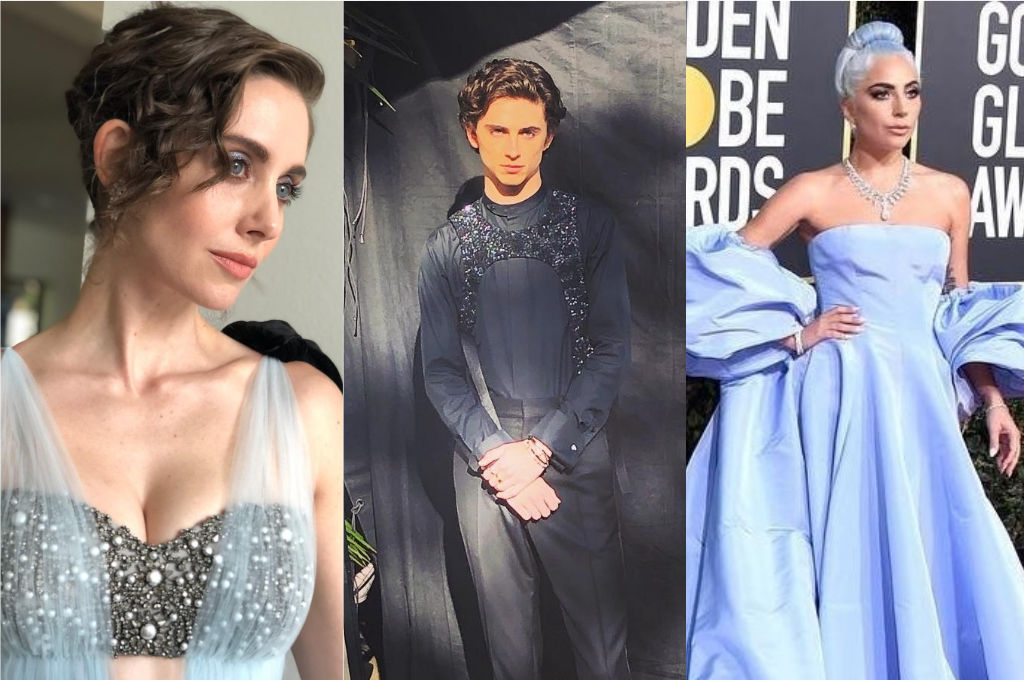 Fashion Was The True Winner At The 76th Golden Globes

Fashion is a subject often underrated as one. The concept of style and ostentation and trends took over leaving the humble birth of sartorial ingenuity. However there are some purveyors of this art that refuse to bow down to the mere glossiness of fashion and concentrate on the individualistic confidence it provides.

To the 76th Annual @GoldenGlobes in Los Angeles, @LadyGaga, nominee for Best Actress in a Motion Picture – Drama for @StarIsBornMovie, wore a #ValentinoHauteCouture pervinca dress and cape made of silk faille designed for her by Creative Director @pppiccioli. #GoldenGlobes

Anything akin to taffeta is drama; but the good drama. Ball gowns are usually always a winner, but every now and then they need that little x-factor. Right from the colour (matched to perfection with Gaga’s hair), to the cape, to the silhouette the gown was a dream fit for a winner.

Darren Criss is a risk-taker, his character in American Crime Story proved that, but the idea to merge something outlandish like floral on your black-tie but still not look like trying too much is something very refreshing. The ensemble evoked art-deco and dapper together, beautifully!

Elsie Fisher in Maroon Everything

The breakout star is apparently a force to reckon with sartorially too; we mean look at this vintage-esque suit. The colour is bold, the ensemble is avant-garde and the actress’ attitude matches everything to the boot! What a look!

Why wear bling when you can just be bling? Kidman’s stunning gown was snug, but floaty – monochromatic but oozing brightness. The minimalism of Kidman’s look adds to the gown being the heroine of this entire magical ensemble!

During the Globes’ weekend, Instagram suddenly burst with images of a curly-haired gorgeous Julia Roberts’ at the awards show during the early 90s boasting off pantsuits and being the OG Boss Lady. Then she wowed us with these delicious pants for this year’s awards and wow! We were in awe.

Chadwick Boseman in a Metallic Tuxedo

This was rather expected because Boseman’s damn good when it comes to looks. He didn’t disappoint this time either. The metallic tux was completely eclectic, but the structured tailoring of it brought it away from being OTT.

Virgil Aboh deserves a mention here, because who else would think of a harness? Chalamet’s jawline and the harness together came to give us a look the Globes had not seen before. The young and brilliant actor rocked the ensemble so well, that we can’t wait for this star to give us more breathtaking looks in the future!

This is a somewhat honourable mention because this is the first red-carpet sighting of Burberry under Ricardo Tisci. The gown that was princess from the back, and mod from the front with a corset was such a fun albeit an understated look. It could have been confusing, but instead it was just sublime!

This was such a creative look. The collar didn’t even let anyone who saw Monae bother with what followed below. The hat and the belt perfectly matched, and the trimmings were bringing such a unique personality to Monae’s number!

The incandescence of this! The black has drama, the shrug has the eccentricity, and the minimalism is so in tune with Pike’s overall attitude! We love how much the look reminds us of a mermaid from space!

Winner #MahershalaAli shows off his golden globe for Best Supporting Actor in a Motion Picture at the 76th Annual #GoldenGlobes, January 6, 2019 | 📸 Matt Baron/Shutterstock

A post shared by Shutterstock Editorial (@shutterstocknow) on Jan 6, 2019 at 6:59pm PST

Undoubtedly one of the most handsome in the attendance, Ali with his Etro look bowled us over with the simplicity, suaveness, and the colour popping all at once. This look was understated but with some embroidered panache that had us wanting more!

It’s like your favourite fairytale princess with a penchant for rebellion. The frothiness of the blue with the studded moto-chicness of the bustier makes this such a beautifully crafted look by Vera Wang – we couldn’t help but be amazed!

As He Turns 52, Meet Irrfan – The ‘Khan’ Who Stole Hearts With His ‘Guy Next-Door’ Charm