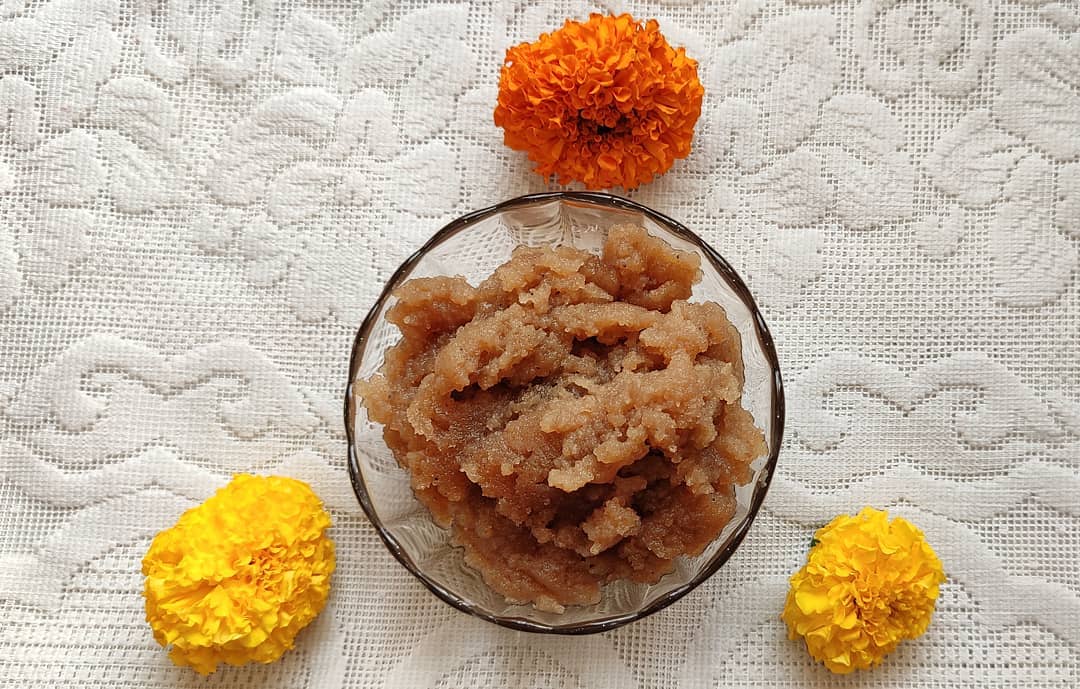 Golden Brown. Rich. Sweet. Tastes better when piping hot. Satiates all my senses. Now, now, don’t let your imagination get the better of you, I am talking about the delicious ‘ Kadha Parshad’ – the taste of heaven on earth.

My earliest memories, like that of many children growing up in a Punjabi household, are of waking up to the aroma of atta and ghee being lovingly stirred by my grandmother. In came the chashni (sugar syrup), the mixture turning soft, a dark shade of golden brown oozing with ghee. The fragrance enveloped the entire house and we waited for the piping hot bowls to be served, but not before it was served first to Babaji with a short Ardaas, a prayer, for the happiness and prosperity of all. The occasion being either Gurupurab or Sangrand (Sankranti).

A trip to the Gurudwara was looked forward, as we were generously given a dollop of the warm, gooey Parshad, which we savoured till the last grain and ghee had been licked off our fingers.

From my grandmother’s kitchen to my mother’s the Kadha Parshad or Gurudwara wala halwa, which was made on auspicious days, also became a quick- fix dessert to whip up when you had guests over. One romanticized and craved its comfort on dark days when you were kind of feeling out of it, or for those chilly nights when you needed a warm embrace. Some even took it for its medicinal purposes, when you were down with a flu or congestion, you were served a bowl of sheera (a lighter form of the halwa).

As one got fitness conscious and set those impossible goals to go off sugar, wheat, and fat, well your best laid plans got the better of you as you caught a whiff of the halwa being made. Out came the excuses, from “it’s parshad“, to “calories in it don’t count” to “what will three spoons do after all it is nourishment”; excuses that I have personally used as well.

Kadha Parshad is eternal. It is timeless and the recipe has been passed on lovingly from one generation to another, it’s a grandmother’s act of indulgence to watch her grandchild licking off the very last morsel, just as their parents did when they were kids, it’s also a mother’s healthy treat for the child who is craving something nice.

At any time of the day some where in some part of the world there would be someone digging into a bowl of Kadha Parshad either at home or Gurudwara.

All images are from Instagram. The main image is attributed to @khaobowmeow

2 thoughts on “A Love Letter To Kadha Parshad, Everyone’s Favourite Bowl Of Blessing”