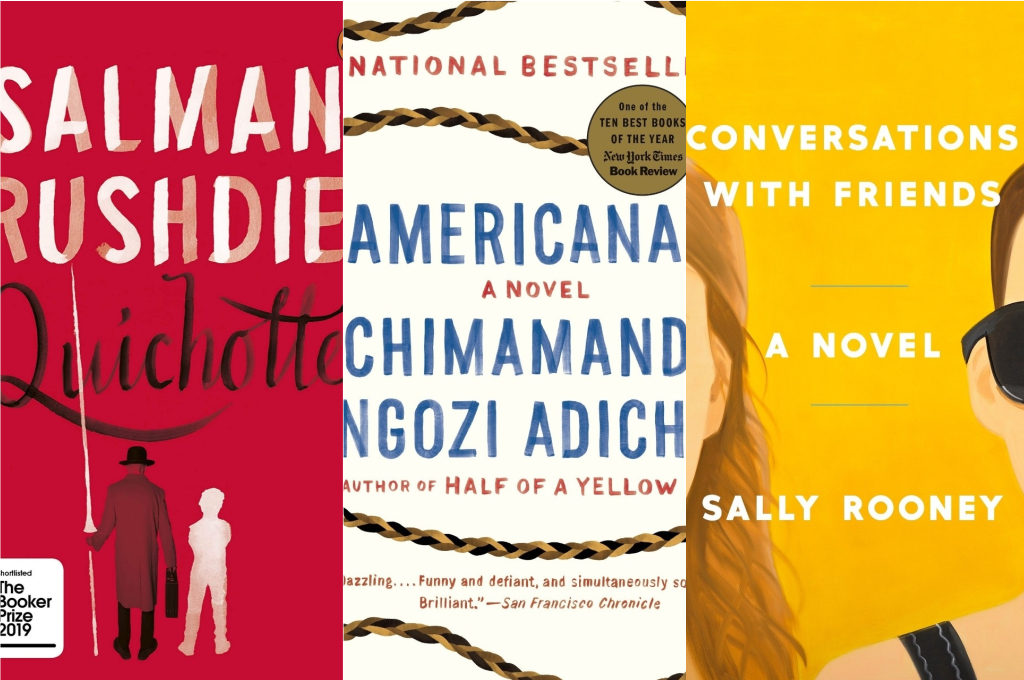 The decade that gave us Americanah, Sellout, and Sense of an Ending, was in itself nothing short of literary magic. The stories transported us to one of the most poignant and tragic moments, but also ones which were laced with mellifluous undercurrents, sinewy syntax, and ultimately resonating with dormant parts of our insides that we had shut down. Whether drowning out fears of dystopia, or being engulfed in an over the top scheme, or retracing roots and finding love, or comparing your secrets to socio- economic ideologies. These 10 books were not only a must-read, but also a must-imbibe. Their lessons absolutely necessary.

There was a time when achingly melancholic love- stories included the wedges of a third person, a misunderstanding, the see saw of status, but as the world evolved and we superficially doned the hat of awareness, the very same love stories met with an unexpected fate. The love story of Ifemelu and Obinze was streaked with not only geographic separation, but also with racism and the reality of uprooting yourself from home in order to suffice ambitions. Ifemelu’s time spent in America, with all the hopes and aspirations that come with it met with the subsequent on-ground reality, form the major theme of the story hence alluding to the title.

Truly an enigmatic narrative which keeps you on the precipice of sanity, will not be an easy read – both because of how comprehensive the character studies go as well as how the storyline pokes a part within you forcing you to relive moments that in the past contributed to wrenching your heart. The theme of the book is as much guilt, as it is the idea of protecting something or someone you love. The waylaid and mendacious ways of Theo, the secretive glory of an artefact, the allure of Pippa, the three men in Theo’s life – Welty, Hobie, and Boris – all come together to draw the attention of the reader in this unassuming thriller which has the urgency of one but the elegance of a tragic prose.

Anyone who reads the work of Julian Barnes is a brave soul; his idea of love is as real as it is surreal, interwoven with such acute longing that it is an absolute mind-number. If a novel, outside of the realm of a suspense one, had to make you gasp for air as you go along – The Sense of an Ending is that novel. The book is ostensibly a quick read, the narrative simplified, but as the book proceeds you start feeling uneasy. From the throes of a seemingly obvious teenage love triangle of Aidan, Tony, and Veronica – to your sense of being getting ripped apart as you near the end, this book is not for the weak-hearted.

The book is a discourse that shuttles between the genius of a mind corresponding with the anxieties of the same mind. The book is also a love story between a mother and a daughter, who rely on their intuition and their faith in each other to preserve the sanctity that the relationship ideally deserves. The story of Bernadette is akin to something we all can relate to, it is of having a world within you, with your ideals and your thoughts and your righteousness, with the inability to really articulate it the way it should be done. The comedy that one sees in the narrative isn’t perfunctory, it is rather warm and gratifying. There is back and forth in terms of how the prose moves in itself, but boy does the entire narrative glide. The book is one of the most easy reads, but only if you immerse yourself in it!

Even though the book includes a narrative that is rather expected, with an idea that is always lurking in the minds of people who fear an Armageddon based typically on ideologies – the book, for its valour deserves to be on the list. A good book is truly one that sits inside of you, haunting you into believing that the book is either chronicling or pre-telling a truth. The book, which most can call polemic towards the present establishment, is perhaps a deafening and damning look at what a dystopia truly looks like. More ‘The Children of Men’ than ‘The Handmaid’s Tale’, this book about the dauntless lives of Shalini and Leilatricks you into an idea of tangible fear but one that is teasing you from behind the pages of a novel, however, it is only when you put the book down do you realise how dismissive we are of certain realities.

6. Conversations with Friends by Sally Rooney: 2017

Anything that is said about this book is less. Sally Rooney’s absolute firecracker debut featuring the anxious Frances and the effervescent Bobbi is an absolute must-read, only because you haven’t ever read anything like this before. With the syntax rather simplistic, the ideas unbecoming, its the execution of very normal thoughts that bring this book alive in a way that you can’t put it down. Frances’ narrative is what fuels the book’s tenacity, with it’s unsurity, its self-deprecation, its opposing self- assuredness, and it’s toying with the idea of envy. The book is a commentary on capitalism and love, and you don’t even realise the overarching message of it until after you pass through particular stages of the book. The book brings forth the unassuming heroine within the trenches of her jealousy, and ambitions. The book is a must-read.

Margaret Atwood is a tough author, and a tougher novelist. Set 15 years from its sequel, the books re-introduces Lydia, as an Aunt in the Gilead, and introduces Agnes and Nicole (Daisy), as children who are unaware of their true roots between the resistance of Mayday, and the power of Gilead. The book doesn’t offer the shock and awe factor of its prequel, however what the book instead talks about is the manufactured vulnerability of a woman’s skills. The theme of The Testaments, looks at the influence and power of wealth used to mete out antiquated ideas about women, which ring truer if we juxtaposed it with the present scenario of the world. Between secrets unravelling between the workings of both Mayday and Gilead, the presence of individuals with mixed affiliations bring a sense of thrill to the book, but it is the affectations with which the Commanders operate throughout the narrative, that force you to put yourself in the position of these women and really get threatened by the similarities. The 2019 Booker Prize co-winner Atwood brought forth the ringing legitimacy of this book by this quote, that I will paraphrase from memory: Always travel with the knowledge of two questions, is it true, and is it fair? For example, is it true that women are inferior to men? No. Then is it fair that they are treated like that? Whatever your answer is should help you figure everything out.

The book can be best described as zany and thoroughly individualistic, one that stands upright from most of its contemporaries. The narrative of Bonbon merges cynicism, humour, satire, regret, and resignation so well that the book disarms you from the realities that the book chooses to present. The life set in Dickens, the idea of the world being post-race, the white-saviour syndrome – all themes get their due in a storyline that is as linear as it is non-linear. The monologue of a son who is accidentally and unintentionally been betrayed by the untrue heroics of his father, is so sublime at times that you feel like the book is truly God-sent to face you with your own personal demons that will lead you to redemption and retribution. The first American recipient of Booker, Beatty is a writer who is also best described as zany.

One of the four books in The Neapolitan Novels, this book stands apart due to possibly treating a predictable narrative in terms of historical authenticity and behaviour, by giving it an enthralling narrative. The book is a crossover between the friendship narrated in Conversation With Friends, with the overall mood of Where’d You Go Bernadette – all three books written by female authors stand strong while chronicling inter-personal relationships between two women. Lila and Elena are friends and partners-in-crime, who both exhibit elements of excellence and brilliance, but regard each other as the true possessors of said accolades. Ferrante’s anonymous identity with similar roots as her protagonists further entice the reader to find clues within the prose. The book is a testament to not only friendship but also the will-power of an individual fighting for her principles in the face of a judgement hour.

Any reader worth their salt, will recognise when Rushdie says his inspiration comes from Don Quixote  – aside from the similar titles. Its the convergence of two different storylines effortlessly weaving and moving around each other, that makes for the story that comes with the recall factor. The story in itself is simplistic – that of a down and out writer, a story of obsession fuelled by idleness and boredom, a quest of finding a purpose to life, and ultimately facing a reality that started off with one dimension but became convoluted due to failing dreams and harsh realities. This book by Salman Rushdie offers some delicious narrative, some untowardness, and some sheer elan that prove why he is a Booker Prize regular!

Disclaimer: These choices are significantly personal of the author, a voracious reader, and in no way are a blanket statement regarding literature of the past decade.

Also Read : From Happy To Envy To Lonely: Books To Read For Every Mood

Tiger Completes Longest Walk Ever In India In 150 Days, Possibly In Search Of A Mate