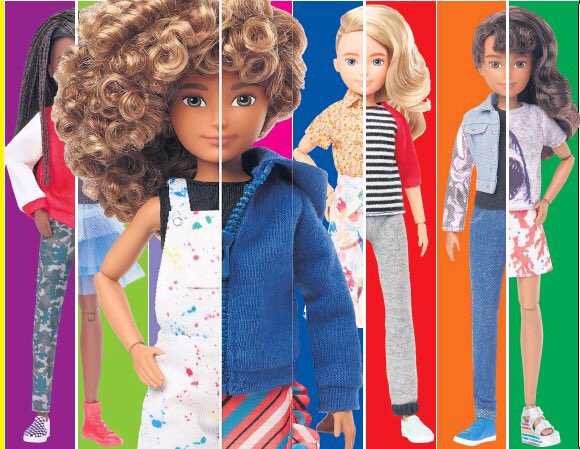 Mattel is mostly known for its hyper-feminine Barbie dolls, but now they’re trying their hands at something a little bit different. The toy goliath launched a line of gender-inclusive dolls, called “Creatable World” that’ll allow children to “express themselves freely”.

🏀 by day and 🎸by night. With 💯 + looks all in one kit, kids can create their own characters again and again. #CreatableWorld #AllWelcome

Mattel’s gender-neutral line of toys represents anyone outside of the traditional genders of male and female, allowing children to create their own characters that they identify with. The Creatable World doll is all about customization and has been designed to be styled with short or long hair, or in a skirt, trousers, or both. Kim Culmone senior vice president of Mattel’s doll design, said the toys are a “reflection of culture” and that as the world continues to celebrate the positive impact of inclusivity, Mattel felt “it was time to create a doll line free of labels”. The idea for the line comes from concern from both parents and children about the gender of toys as Culmone said, “Through research, we heard that kids don’t want their toys dictated by gender norms”.

While creating a toy that isn’t dictated by gender norms is new for Mattel, it has in recent years attempted to detach itself from the sexist stereotypes and unrealistic beauty expectations once associated with its best-known doll, Barbie. The toy manufacturer has reacted to criticisms surrounding diversity with the launch of its Fashionista line that includes dolls in a range of body sizes and skin tones. This line-up also features dolls with physical disabilities, including one with a prosthetic limb and another doll that comes with a wheelchair.