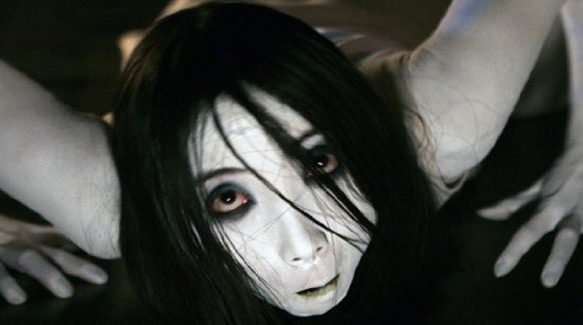 30 Days Of Halloween: The Grudge’s Ghostly Curse Is Still A Bone-Chilling Horror Feast

Karen played by Sarah Michelle Gellar recently moved to Tokyo with her boyfriend Doug played by Jason Behr. Pretty and in love, they snuggle in the morning before Karen heads off to a social work office, in need of a credit to buttress her nursing degree. Here her supervisor sends her to her first solo home visit as the regular girl Yoko appears to be missing. From this premise, Takashi Shimizu’s The Grudge unfolds in episodic fashion, flashing backward and forward in time as various loosely interconnected characters enter the house and encounter malevolent spirits.

By the time Karen is on her way, only a few minutes into the movie, you’ve already seen a couple of grisly deaths, and so are likely anticipating the visit will be daunting, especially if you’ve seen Shimizu’s first Japanese version, Ju-On: The Grudge or its sequel, Ju-On: The Grudge 2. The Grudge puts an interesting spin on the old haunted house genre. We are told simply in the opening credits that the Ju-On means “the curse of one who dies in the grip of a powerful rage”; in this case the rage is through a man who dies after brutally murdering his wife and his son. This leaves the house haunted by the woman, the young boy and a cat, and anyone who enters the house immediately becomes destined to die at the hands of these pallid complexioned ghosts.

If there’s one thing that defines The Grudge, it’s the unsettling atmosphere it manages to create. The score is minimal, the pacing slow and everything is painfully quiet. The kind of quiet where, if you’re in your house alone at night, you’re never quite comfortable. It also plays on more modern superstition, with shadows taking a life of their own and phones letting out piercing caterwauling sounds. Shimizu creates an unsettling environment out of everything that plays tricks on the eye and ears and all the silly irrational fears that for some reason still play on our minds.

The Grudge is a stylish, moody film that methodically constructs a pervasive atmosphere of dread. As such, it’s a welcome change from the teen gore-fests and CGI roller coasters to old school horror. It takes its scares seriously, playing them without humour or irony. When the white-faced demons emerge to suck out yet another life, The Grudge doesn’t wink, it shivers. And that, in itself, is refreshing.

“You Don’t Have To Be Gay”, Miley Cyrus Says During A Tell- All Instagram Live

8 Pasta Dishes You Need To Eat Before You Die