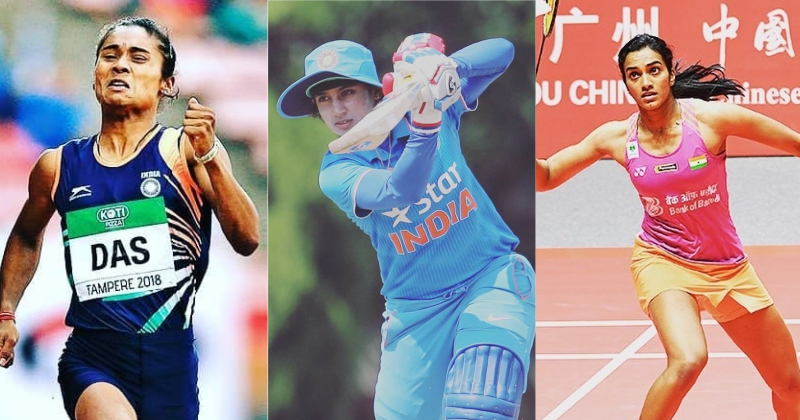 2018, The Year Indian Women Dominated Sports Without A Man In Sight

Sports is perhaps the bastion of masculinity. It is the wear and tear, the rough and tough of sports that men use to herald themselves as the superior and stronger gender. And what happens when they are dethroned from that seat of extreme entitlement? What happens when an entire spectrum of sports is annotated by the powerful performance of women?! A tribe of strong, stunning, self-reliant women is brought about. This is what 2018 was all about. It was about women who are sportsperson par excellence, they are gentle but they boast of strength, they are simple but they boast of power that is inexplicable.

Women who beat records, women who created history, women who only knew how to soar. 2018 is an unusual year for recapping sports, because not a single male player did anything extraordinary. Or even if they did, isn’t the world bored by the gender disparity? Here are some women, out of a league of many lest we forget them, who knocked it out of the park and how.

1. Mithali Raj went on to become the highest run-getter in T20Is, surpassing Rohit Sharma and Indian men’s team captain Virat Kohli. Mithali is at 2283 runs so far while Sharma and Kohli have scored 2207 runs and 2102 runs in T20Is respectively. Who run Indian cricket? It’s Mithali Raj!

… on a lazy Sunday with this notorious fella who is as much a poser as I . Sunday vibes in a co-ord set by @toile_label

2. Hima Das won India’s first ever track gold medal at the IAAF World Under-20 Athletics Championships in Finland. She recorded a time of 51.46 seconds in the 400m race. Run like a girl, so you can win those medals!

3. Dipa Karmakar  participated at the FIG Artistic Gymnastics World Challenge Cup in Turkey on July 8 and bagged a gold medal, hence becoming the first Indian gymnast to clinch the yellow metal at a global event. No one stronger, no one sturdier!

At the cover launch of my book Dipa Karmakar: The small wonder 👗: @aaliyawoman Pre-order link in my bio

4. Dipika Pallikal is the first Indian to enter into the top 10 PSA Women’s rankings in Squash! Unstoppable force of nature, so super successful!

‪This one is special ! To my parents , my in laws, my husband , family , coaches and friends – This one is for you. Thank you for believing in me even when I doubted myself. This 🥉 belongs to all of you ! #asiangames2018

4. Ace Badminton player PV Sindhu becomes the first Indian to win a gold medal at the BWF World Tour Finals 2018. All the while being the sassiest queen on the court!

5. Mary Kom won her sixth gold medal in women’s 45-48 kg category at the Commonwealth Games 2018. And you thought only men could knock people out with their strength?

6. Rahi Jeevan Sarnobat clinched a Gold Medal for India in women’s 25m pistol event at the Asian Games 2018. Not only did she win a gold medal but also set a new record in a double shoot-off in 25m pistol event. Grit, focus, and perseverance are anyway synonyms to womankind!

Had an engaging chat with the @thetimesofindia team and @mahesh.vichare. Was a great experience meeting you guys. For the entire interview check out today's edition of @maharashtratimesonline

7.  Vinesh Phogat from the famous Phogat family of wrestlers, clinched a Gold medal in Asian Games 2018. She had also bagged another Gold at Commonwealth Games 2018 in the Gold Coast. She is the first ever Indian woman wrestler to win Gold in both Commonwealth Games and Asian Games. A legacy that rests on shoulders of women, is sure to carry it on with minimal obstruction!

8. Swapna Barman bagged a Gold medal in Women’s Heptathlon at Asian Games 2018. And we thought only men could bring versatility to sports!

‪firstwomensgoldinathletics Congratulations for ur gold .you prove to be real gold for the country hardwork and pain made it at the end. Proud of you my dear friend keep working hard reach further sky #swapnabarman @swapna.barman.3720 #gosportsvoices @gosportsvoices

9. Harmanpreet Kaur is the first Indian woman cricketer to score a century in T-20 Internationals. She is the third player in world cricket to score a T20I International century. Men who? Cricket is now the ample play field for womenfolk, and this is one of the faces that prove that!

Wondering what a gift nature is to us …..The calm , The storm , The stillness , and every bit of it is tranquil ❤️ #natureatitsbest #srilankaitis #eatplayrestexplore #mesmerised

10. Ekta Bhyan won the gold medal in the women’s club throw event with a throw of 16.02 metres at the Asian Para Games 2018. Did we hear someone call out strength and resilience? Or were you just looking for Ms. Bhyan?!

11. And at last but not the least, three cheers to the Indian Women’s Hockey team for making it to the finals of Asian Games 2018 in 20 years. And we thought wonder women existed only  in films.

Visit A New Place Every Month; That’s How Your 2019 Should Look Like

1 thought on “2018, The Year Indian Women Dominated Sports Without A Man In Sight”