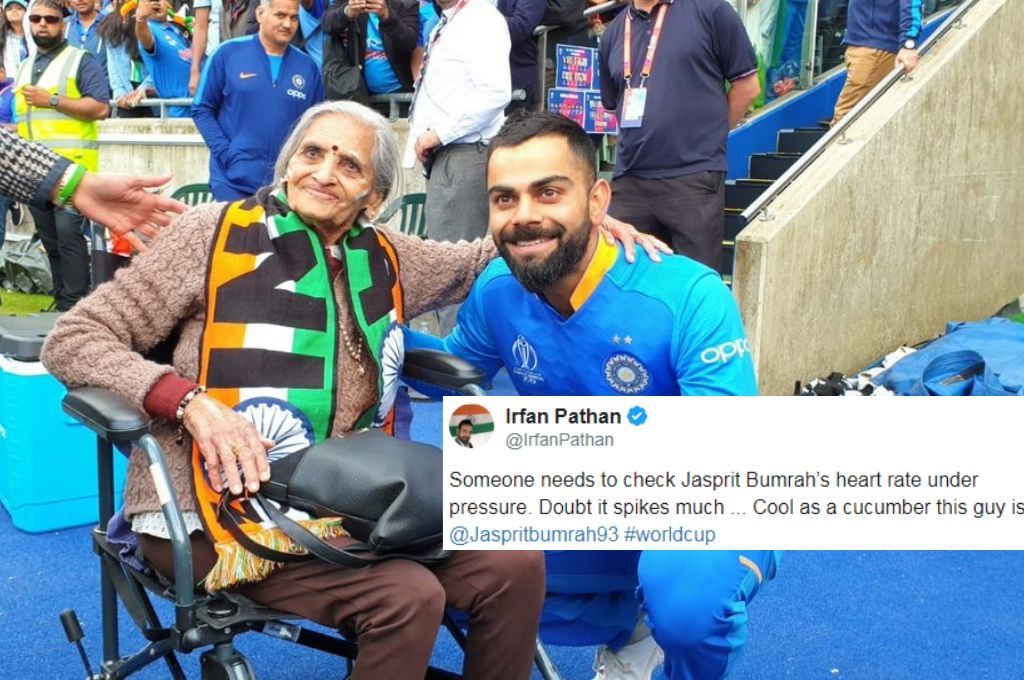 India bounced back from its defeat against England as the team survived another scare at the ICC World Cup 2019. And this time, it was Bangladesh who was the adversary. Chasing a score of 315, the Bangladesh team was a reckoning force on the field, but India survived. KL Rahul and Rohit Sharma displayed a partnership of grit and class as the duo scored a total of 180 runs, making the feat harder for Bangladesh. Jasprit Bumrah too deserves a mention with four wickets falling to his spell including the opponent team’s last two wickets back-to-back, at the intense moment when Bangladesh needed just 29 to win from 14 balls. And with this win, India is the second team to join Australia in the semi-finals of the World Cup.

And Twitter, like always, cherished the win. Words of praise flowed in for the ‘Men in Blue’ and here we present a few.

What a unit. We march on. Jai hind 🇮🇳 pic.twitter.com/uDiih3fFiD

Heartbreak for Bangladesh, joy for India – the two-time champions win by 28 runs to book their place in the semi-finals!#TeamIndia | #BANvIND | #CWC19 pic.twitter.com/PgMjIWSGJa

A place in the semi-finals for #TeamIndia as they beat Bangladesh by 28 runs 🇮🇳🇮🇳💙💙 #CWC19 #BANvIND pic.twitter.com/R3vSMsc8hD

Congratulations Team India @BCCI for getting into semis… what a champion @Jaspritbumrah93 top stuff.. @hardikpandya7 great show with the ball. Keep the momentum guys 🇮🇳

Congratulations India on a well deserved win and cementing a place in the semi-finals. Bumrah was superb in the end but have to admire @BCBtigers for the magnificent spirit and fight they showed in the end. #IndvBan

Jasprit Bumrah is such a superstar. Terrific in the end. But have to complement Bangladesh on the fantastic fight and getting so close, especially after Shakib got out.
Congratulations Team India #IndvBan

Quite the thriller, this one. A captivating game laced with a couple of high-quality knocks by our top order batsmen. Bowlers did their job well – picked wickets consistently and kept the pressure on. #INDVBAN #CWC19

Someone needs to check Jasprit Bumrah’s heart rate under pressure. Doubt it spikes much … Cool as a cucumber this guy is @Jaspritbumrah93 #worldcup

If #Dhoni hits singles in death overs, he is wrong..

If #Dhoni retains strike, so he can hit boundaries and doesn't take singles, he is wrong again..

What is he supposed to do.. Biased Commentary of the highest order!#INDvBAN #CWC19

India are in the semi-finals of the #CWC19! All credit to Bangladesh for giving us a good fight all the way & failing just by 28 runs. One more match awaits us before we know who we are likely to face in the semis. The SriLankans are fresh from a good win & will be no pushover.

Boom Boom Bumrah! Find me a better bowler at the death

Bangladesh must take pride in this #cwc19 campaign. Lots of injuries and tactical and skill limitations apart, there was spirit about how they went about things.

If not for a result here, a washout there and today's bunch of soft dismissals, it could have been different story.

Bumrah is a gun!

Semis. Here we come. Brilliant performance by the batsmen led by @ImRo45 paaji and then by bowlers by the magnificent @Jaspritbumrah93. 3 (possibly) more games to go 😬🤘 #CWC19

Bangladesh is running India close, even at 8 wickets down.. Good on them for fighting hard..imagine if Shakib hadn't gotten out #ICCCWC2019

Bangladesh should be very proud of their performances and efforts at this World Cup:

Congratulations #TeamIndia for making it into the Semi Finals 🇮🇳 What a fantastic game by the entire team 🏏 #BANvsIND #ICCCWC2019 #Rohit #Bumrah INDIAAAA 🇮🇳👏💪🤩 #Ting pic.twitter.com/jbdBBFSJH5

#INDVBAN and we’re in the semifinals of the #WorldCup2019 but I must say #Bangladesh fought really well. They’ve been great all thru the tournament.

India won, Bangladesh lost but their lower order batsmen displayed terrific fighting intent till the end unlike our middle & lower order batsmen. Congratulations India we are in the semis now.. Bumhra is the Savior all the time. Respect bhai @jaspritbumrah93 #INDvsBAN