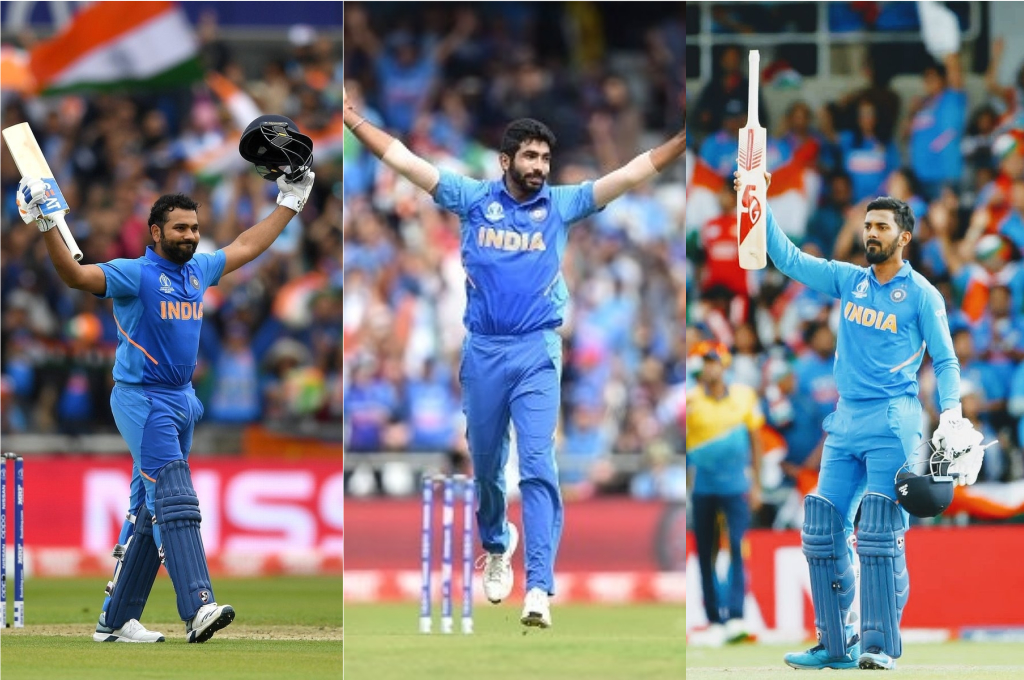 Team India is indomitable at the ICC World Cup. Even though the team has already secured a place in the semi-finals, the Men in Blue still went on to overpower Sri Lanka by seven wickets in their last match of round-robin stage. Not only that, the team also made the day super significant; a day that’ll be seen as one of the finest in the history of Indian cricket. Rohit Sharma is in the form of his life as he rewrote the record books by becoming the first batsman ever to score five centuries in a single edition of the World Cup. Jasprit Bumrah became the second Indian player to take 100 ODI wickets and even KL Rahul scored his first century in the World Cup. Twitterati had reasons enough to indulge in joy and merry making and here’s how they celebrated.

3 consecutive 100s and 5 in a single @cricketworldcup is just phenomenal, Rohit.
Very good to see @klrahul11 go on to convert a good knock into a 100 as well!👌 Good signs. 🙂#CWC19 #INDvSL pic.twitter.com/p7e3cduV8B

Oozing class on the way to the 🔢5th ton of the world cup. @ImRo45 is now making numbers look silly. #ICCCricketWorldCup 👏

Some of these legends do not have more than 5 ODI hundreds in their career.
Rohit Sharma has scored that many in one World Cup. What form!! What a player!! #WC19

Only two men in 142 years history of international cricket have scored 5 centuries in one series/tournament. Rohit Sharma in WC 2019 and Sir Clyde Walcott in a Test series vs Aus in 1955. #CWC19

So happy for this brilliant young guy @klrahul11. This is how you shut them up da. More power to you. Our foundation is looking so strong going into the semis. What a campaign! #BleedBlue #CWC2019 #INDvSL

Bit of grip and turn for Jadeja. Quite the conditions he would have ordered.

Unbelievable consistency from Rohit Sharma, World Cup 100’s running in him like haemoglobin in our bloods. A good 100 from KL Rahul as well and a well deserved win for Team India. Semi Finals kiske saath lag raha hai ? #IndvSL pic.twitter.com/ehp5VZXWWF

It has been a class display from Rohit Sharma this World Cup, to score 5 centuries in a single edition in just 8 innings is truly special. Feel delighted for KL Rahul as well, has been a pleasure to see him score a 100 today. Brilliant for Indian Cricket #IndvSL pic.twitter.com/6EYdgD4OHi

Just how good is Bumrah….he’s in a different league. A league of his own. #CWC19 #IndvBan

#INDvsSL
Am hoping Jadeja will do his Bits today And shred the Sri Lankan middle order to Pieces.

Jadeja HAS TO play in this Indian team in the semi-final.

Shami back for Kuldeep & DK out to keep Jadu!

Still an easy game for England, but India’s best options…

In last 365 days, Rohit Sharma has aggregated a mind-boggling 2063 runs in 34 innings with 10 hundreds.
No one else has scored 10 hundreds in ANY span of 365 days in one-day international cricket!#INDvSL #SLvIND

Spiffy day for Jadeja. Brilliant in the field, as usual, and a fine spell. Had luck been on his side, would have chalked up a couple of more wickets. Perhaps would play ahead of Kedar Jadhav in the semi-final.. #CWC19

Matthews and Thirimanne doing a good job of rebuilding. Will look to push the score to 250. But that is still some way off. #CWC19 #SLvIND

Well done @Angelo69Mathews .. At his best…. A hundred under pressure #IndvSL #CWC2019 The runs after the hundred will decide this match !!!! Cmon..!!! A brilliant hundred now make it a match winning one.

Congratulations @Jaspritbumrah93 on adding another feather by becoming the second fastest Indian to take 100 wickets in ODIs. 🏏 @BCCI #CWC19

Most 150-plus opening stands in an edition of ODI WC:

What was even more heartening than @ImRo45's record 5th century this World Cup was @imVkohli's tension as Rohit neared the three figure mark and his absolute delight when Rohit got there. Proud to support this team, whatever the result!

No one ever has scored a century 5 times in one edition of the @cricketworldcup.. a dream run! Top class @ImRo45#INDvSL #CWC19

only west indies & afghanistan, the two bottom placed teams have managed to get rohit sharma out cheaply at #cwc19 #INDvSL

Rohit Sharma is playing at another level, fatherhood has helped him immensely. Also, nice to see KL Rahul convert this into a 100. #IndvSL

Can't speak for others, but the thought that #Malinga won't play another World Cup match leaves a lump in the throat.#INDvSL #SLvIND #CWC19

Klass L Rahul… top 100 by this lad. Should give him immense confidence going forward in his career #KLRahul

Different pitches, different oppositions, plus the world cup stage…5 hundreds!… with a possible 2 games to go is just ridiculously brilliant!#RohitSharma

Manla Tula Rohit!🙌
Coining a new term today just for you "RohitZone"
Can keep watching you all day long without blinking an eye.#CWC19 #INDvSL @cricketworldcup pic.twitter.com/3RpHQN3zas

They have the temperament, they have what it takes to power up & carry the day on their shoulders. Fiercely focused & consistent with the bat, @ImRo45 @klrahul11 are proving to be quite the opening pair. Fantastic innings the by two, all geared up for semis! #INDvSL #CWC19

Rohit Sharma is the Virat Kohli of #CWC19

Shadow Kohli is an achievement itself.

5 hundred in a World Cup is just out of this World show.

In SF and Final (if reached) Rohit will trump card along Kohli.

A calm and composed century that from #KLRahul following a 77! Here's to many more such knocks! Cheers! ☕ #WhistleForIndia #INDvSL #CWC19

This is the KL Rahul we all know. ❤️

1⃣0⃣0⃣ up for 🇮🇳, that too without a fuss! 😎
🔥Rohit Sharma 🤜🤛 KL Rahul 🔥#SLvIND #CWC19 #TeamIndia #KorboLorboJeetbo

7 Things You Should Never Ever Say On A Date