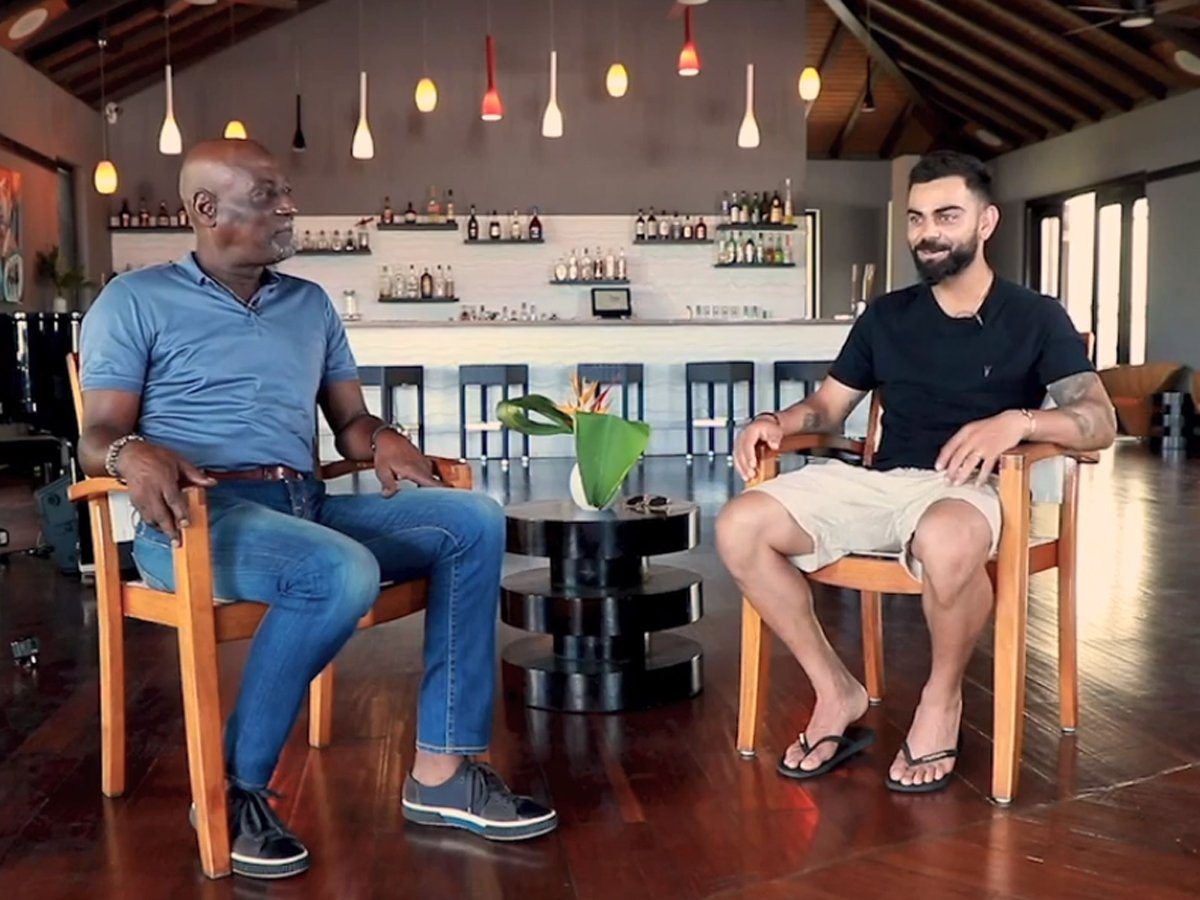 When Legends Meet: Virat Kohli Gets Candid About Cricket And Love, With Sir Vivian Richards

If there’s one person Indian skipper Virat Kohli can’t stop fan-boying over, he’s none other than Sir Vivian Richards; the two cricket great share a great rapport. Kohli, who is one of the best batsmen of the era, has drawn comparisons with the West Indies veteran for his attacking playing style. So much so that Richards himself has gone to the extent of saying that the Indian talisman’s batting style reminds him of his own heydays.

Team India is currently on a West Indies tour and right before its last leg and the Test series kicked off, Viv and Vir had a surprise in store for their fans. The two men decided to face the camera for a “special interaction” with each other to talk about all things cricket and beyond. And it was during this interaction that both Kohli and Richards spilled the beans about their likes and dislikes, preferences and odds both on-field and off-field.

To begin with, did you ever know Kohli hated practicing in the nets? He finds them “claustrophobic”! He would rather practice on a centre wicket with fielders around as it gave him match stimulation. Kohli was quoted saying, seeking the opinion of Richards on his approach to net practice, “You would go with the intent, with the purpose that I’m going to stand up against my own bowlers and not get out, not even hit a ball on the edge, hit everything from the middle of the bat”. And just the way great minds think alike, Vivian Richards couldn’t agree more with Kohli as he said, “It is the same thinking, you go and try to eliminate may be the getting out process, but I have always found nets to be claustrophobic for me and I never felt comfortable”. To this, the Indian skipper responded, “I think exactly the same things about net practice how it can be claustrophobic and I prefer having a centre-wicket net which is open against our bowlers with fielders so that I have a match simulation.” 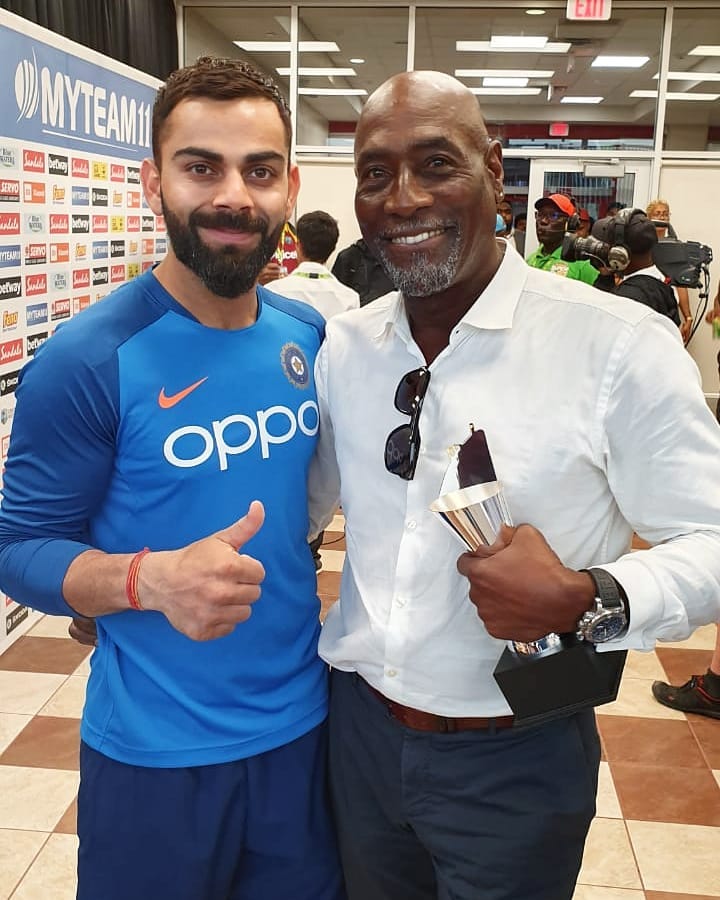 Further, the Indian skipper Virat Kohli also shed light on how he doesn’t mind getting hit and that too hard immediately after he takes guard as he feels it fires him up to have a go at the bowler. He said, “I always feel it’s better to get hit early on and know the feeling rather than always feeling you might get hit. I prefer getting early on and hard, it motivates me to not allow that to happen again.” Vivian Richards too had his say on the matter, although his statement was nowhere close to being as flamboyant as Kohli’s. “It’s all part of the game. It depends on how well you come back from these knocks. Before we had little guards around your ribs, you would take a hit and that’s where you would feel and take a count but that’s all part and parcel of the sport,” he said.

🚨Part of 2 of the special chat with @ivivianrichards and @imVkohli is out!

Playing in Australia brought the best out of them. Find out how they relished the challenge of taking on some of the best bowlers in the world. 😎

In the second episode of the two-part interaction, Kohli besides stressing on visualization also candidly expressed his feelings towards his wife, Anushka Sharma. After Sir Viv prompted Virat to talk about his private life and suggested that being happy in his domestic affairs may have helped the India skipper take his performance to the next level, the 30-year-old Kohli couldn’t agree more and gave a steer clear response. He said, “Actually, it’s been the biggest blessing in my life apart from being blessed to play this sport. To find the right person. Because she is a professional herself, she totally understands my space. She guides me in the right direction. The thing that I have learned from us being together is that if you are willing to do things which are right in your life, off the field, and doing the difficult things and standing by them, I think that creates your personality to go on the field and do the same thing.” 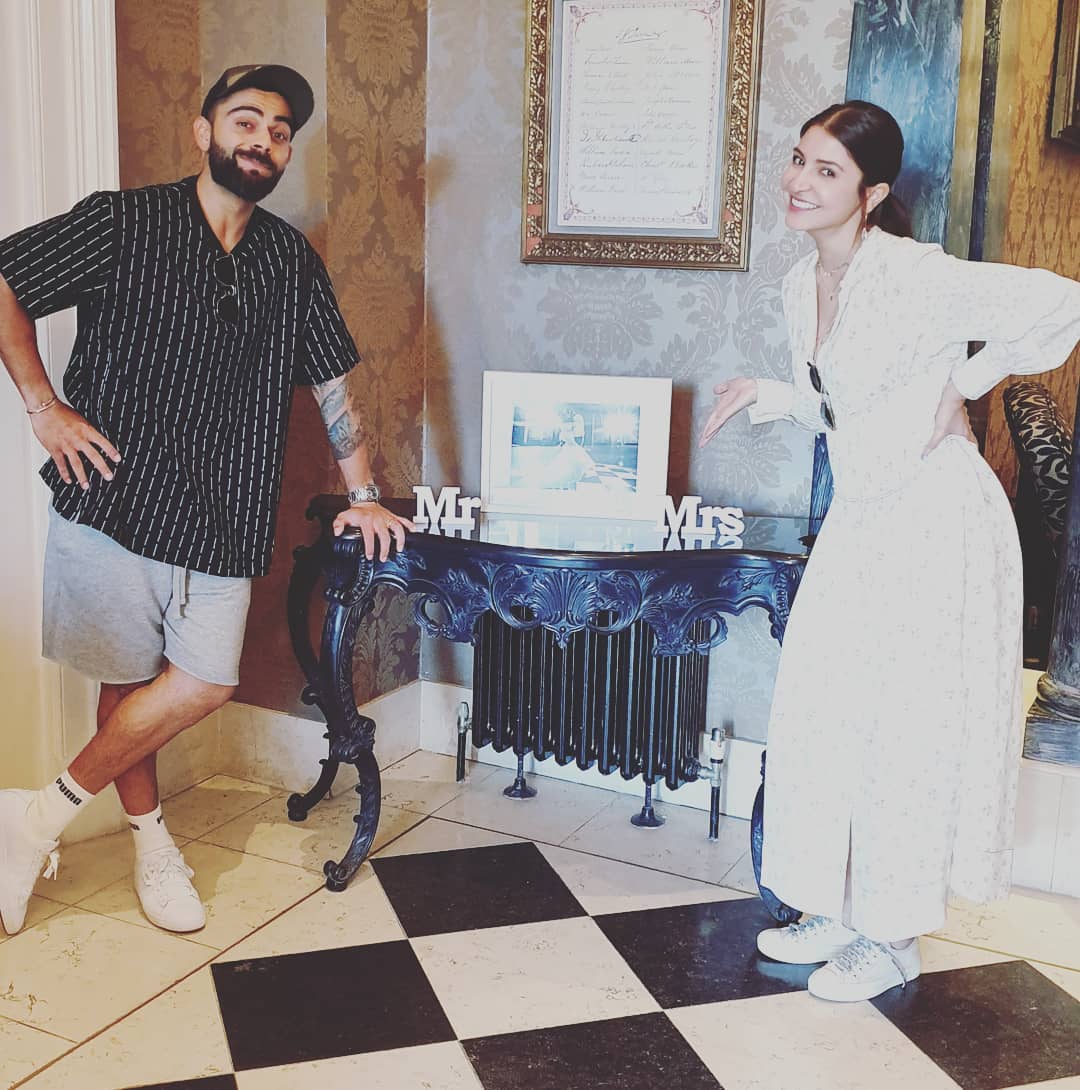 Well, it’s wonderful to see the two cricket great show such bonding and mutual admiration. Sir Vivian Richards was known for his supreme self-confidence while Virat has been in the limelight for his aggression and passion. It wouldn’t be wrong to say if Tendulkar resembled the god-gifted genius of Bradman, then Kohli’s rampaging attacks mirror the tenacity of Richards.

Amazonian Rainforest Is Burning, And Here’s How You Can Help Save It