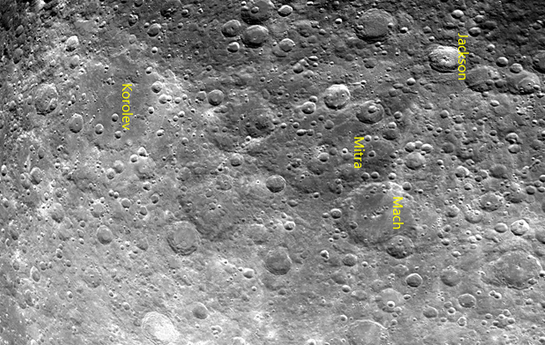 After nearly a decade, India is finally getting closer to the moon as ISRO released the second picture of the moon taken by Chandrayaan-2. As per ISRO’s tweet, the picture was captured by the rocket from an altitude of almost 4,375 km. Among the features visible in the new images are prominent craters Jackson, Mitra, Mach and Korolev. The crater Mitra gets its name from Professor Sisir Kumar Mitra, an Indian physicist and Padma Bhushan recipient, who was known for his pioneering work in the field of ionosphere and radiophysics.

#ISRO
Lunar surface imaged by Terrain Mapping Camera-2(TMC-2) of #Chandrayaan2 on August 23 at an altitude of about 4375 km showing craters such as Jackson, Mach, Korolev and Mitra (In the name of Prof. Sisir Kumar Mitra)

Earlier, ISRO also shared the first image of the moon taken by Chandrayaan-2. It said in its tweet that the rocket’s lander Vikram had taken the picture from a height of about 2650 km from the lunar surface on August 21.

Take a look at the first Moon image captured by #Chandrayaan2 #VikramLander taken at a height of about 2650 km from Lunar surface on August 21, 2019.

Mare Orientale basin and Apollo craters are identified in the picture.#ISRO pic.twitter.com/ZEoLnSlATQ

ISRO, on August 20, let the world know that Chandrayaan-2 successfully entered the lunar orbit after nearly 30 days of interstellar travel. Even a small error could have proved catastrophic. ISRO in a statement had said, “Lunar Orbit Insertion (LOI) maneuver was completed successfully today (August 20, 2019) at 0902 hrs IST as planned, using the onboard propulsion system. The duration of maneuver was 1738 seconds. With this, Chandrayaan-2 was successfully inserted into a Lunar orbit. The orbit achieved is 114 km x 18072 km.”

There will be further four orbit manoeuvres to make the spacecraft enter into its final orbit passing over the lunar poles at a distance of about 100km from the Moon’s surface, ISRO has further said.

This mission, if successful will make India the fourth country to soft land a rover on the lunar surface after Russia, US and China, after Israel failed this year.

Check Out The First Poster Of Ajay DevGn’s Next Release