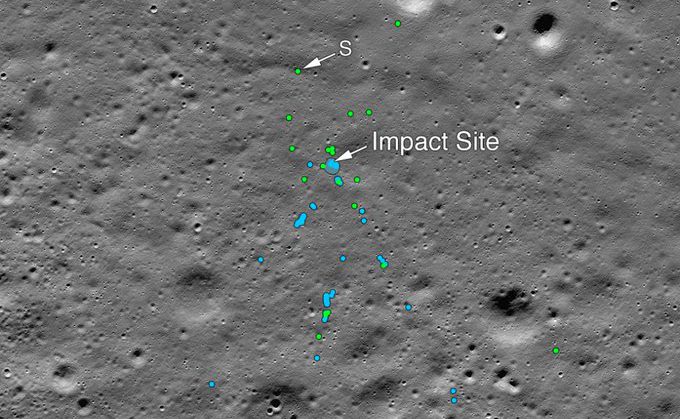 Just almost three months months ago, India’s historic attempt to soft land on the lunar South Pole came to an end after communication was lost with the Chandrayaan-2 Vikram lander. And now, an arresting NASA image reveals the crash site and final resting place of the mission.

NASA included coloured dots to show the initial impact site of the lander, as well as the debris field created by the crash and the upturned regolith or moon dust.

The #Chandrayaan2 Vikram lander has been found by our @NASAMoon mission, the Lunar Reconnaissance Orbiter. See the first mosaic of the impact site https://t.co/GA3JspCNuh pic.twitter.com/jaW5a63sAf

The crash site was located by Shanmuga Subramanian, who on his own scoured the pictures taken by the Lunar Reconnaissance Orbital Camera (LROC), NASA and Arizona State University. NASA said that the the image mosaic collected ten days later the crash was released to the public for citizen scientists to scan for signs of the lander. The Indian origin scientist identified the debris field and contacted NASA, according to the agency. They were able to confirm the finding by comparing before and after images provided by the orbiter.

The Vikram lander was expected to settle about 600 kms. from the lunar South Pole on September 7, but the team lost contact with the craft shortly before touchdown. If successful, India would have become only the fourth nation to land on the lunar South Pole.

1 thought on “#Chandrayaan2 Vikram Lander Has Finally Been Found”