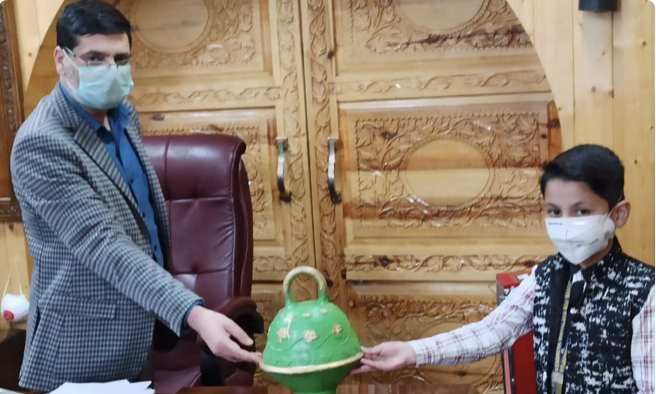 The coronavirus pandemic has jolted the world out of everything else. In a bid to protect millions of people and stop the virus from circling back around the globe an eight-year-old boy from Kashmir donated his piggy bank savings.

The Jammu and Kashmir Department of Information and Public Relations tweeted a picture of Malik Ubeed handing over his piggy bank to the district commissioner.

#Beautiful_Surprise
This 8 yrs old kid, Malik Ubeed frm Nowpora, a student of class 4th, dropped in at DC Bandipora office today along with his Piggy Bank. He walked in & handed over his piggy bank saving to the DC & wanted the money to be spend in the fight against #COVID19. pic.twitter.com/xrPbTzi18f

“This 8-year-old kid, Malik Ubeed from Nowpora, a student of class 4, dropped in at DC Bandipora office today along with his piggy bank. He walked in and handed over his piggy bank savings to the DC and wanted the money to be spent in the fight against #COVID19,” the post reads.

Malik Ubeed is from the Nowpora area in North Kashmir. The officials, who were present at the office during Malik’s visit, said that they were surprised with the child’s gesture.

“We insisted that he should pose for a picture because this was really heartwarming,” a local official told a news portal.

In other news, several other children, including a seven-year-old boy from Mizoram and some kids from Gujarat, donated their piggy bank savings to help fight Covid-19.