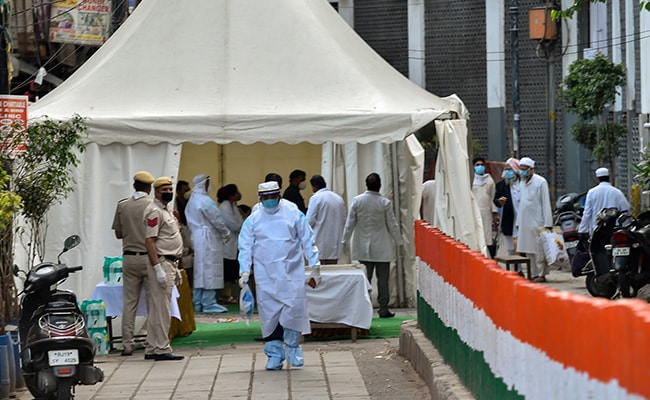 24 More Test Positive For Coronavirus, As 7 Die After Tablighi Jamaat Meet In Nizamuddin

Over 300 people in Delhi have been taken to different hospitals to be tested for coronavirus after a gathering at a mosque that had visitors from Malaysia, Indonesia, Saudi Arabia and Kyrgyzstan. In a sudden outbreak and detection of multiple coronavirus cases, the Delhi-based headquarters of Tablighi Jamaat in Nizamuddin West has turned into a hotspot.

“So far 24 people staying there have been found to be coronavirus positive,” said Delhi Health Minister Satyendra Jain.

“A grave crime has been committed,” he added.

Delhi Chief Minister Arvind Kejriwal ordered a police case against the mosque administration over negligence that has endangered hundreds of lives.

Ignoring all social distancing rules to avoid the deadly coronavirus, hundreds had been staying in the 100-year-old mosque complex, which has a six-floor dormitory, since a two-day gathering of the Tablighi Jamaat from March 13 to 15. Tablighi Jamaat is an Islamic missionary movement set up in 1926, with members across the world.

Many of those who attended then travelled to other parts of the country. The Indonesians, for instance, went to southern states like Telangana.

Contact tracing from the mosque gathering, which has been identified as a virus hotspot, has been given high priority by the home ministry, according to sources.

Officials point out that long before the lockdowns, the Delhi government had called for suspending all gatherings, religious, cultural or social.

Nine Indians who attended – six in Telengana and one each in Tamil Nadu, Karnataka and J&K – have died of the disease.

At least one foreign national, a Filipino, has died and 19 foreigners, followers of this Islamic missionary movement, have tested positive for Covid-19 across the country so far. Of 25 new cases of Covid-19 that Delhi reported on Monday, 18 were from this seminary in Nizamuddin, said a senior official from the state health department.

The headquarters of the Jamaat, known as Bangle Waali Masjid, has been sealed.

7 Fun Ways To Engage With Your Children That Doesn’t Require Games!