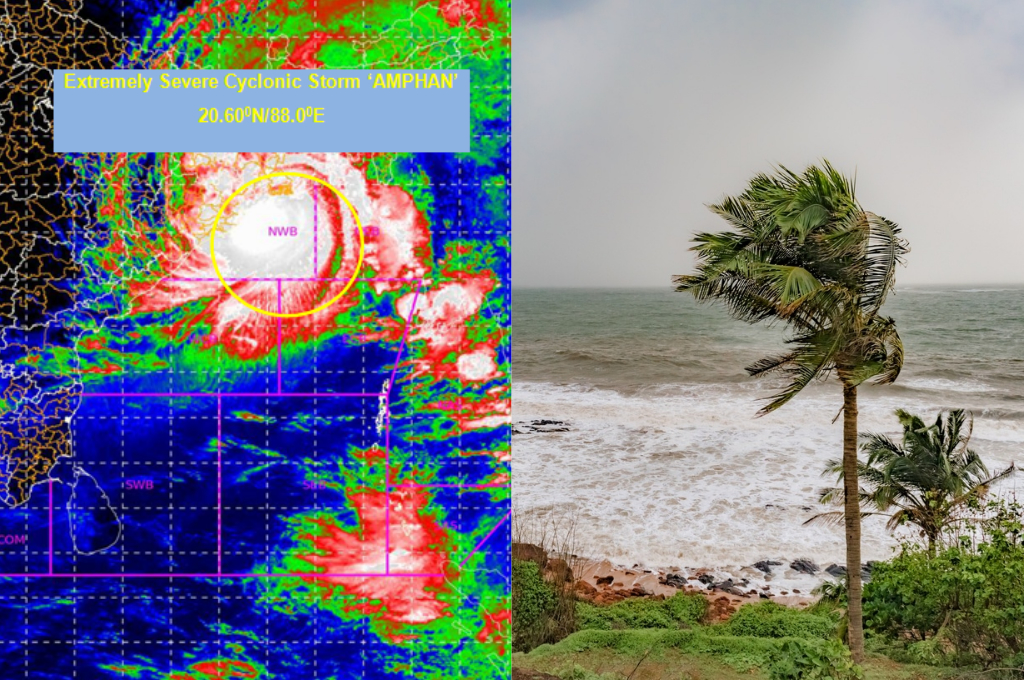 Taking a brief steer from #Coronavirus is #Amphan – the ‘super cyclone’ that’s being considered one of the worst storms over the Bay of Bengal in many years. While the Indian Meteorological Department now says that the cyclone’s impact has now ‘weakened’ to an “extremely severe cyclonic storm”, here are 10 easy points to make you understand the phenomenon better.

2. Cyclone Amphan will most likely hit Bengal between 4 to 6 pm on Wednesday, May 20. In order to prepare better for this, close to 4.5 lac people have been evacuated from areas where Amphan is expected to move at the speed of 185 kilometres per hour.

3. In view of the threat to life and property posed by Cyclone Amphan, a total of 41 teams of National Disaster Response Force (NDRF) have been deployed in West Bengal and Odisha. It’s impact, however, is ‘unlikely to be very severe in Odisha’, IMD Director-General Mrutyunjay Mohapatra said.

4. Whatever essential cargo and evacuation flight operations that were being permitted to take place from Kolkata airport – amidst the nationwide lockdown in wake of the novel coronavirus – have been suspended till 5 am of Thursday, May 21, due to the cyclonic storm ‘Amphan’.

5. People living in or close to coastal areas have been asked to remain home and fishermen have been asked to stay ‘off coast’. “The tail-end of a cyclone can do worst damage, so people should not come out of their homes until instructed to do so”, Chief Minister Mamata Banerjee has said.

6. While coastal districts like Jagatsinghpur, Kendrapara, Bhadrak and Balasore are facing heavy rains and high-velocity winds since Tuesday, May 19 evening, coastal districts of North and South 24 Parganas, and East Midnapore, including the ecologically fragile Sundarbans, in West Bengal could face ‘a serious threat of inundation and significant damage to life and property’, say IMD officials.

7. Union Home Minister Amit Shah, on Tuesday, May 19, has spoken to Odisha Chief Minister Naveen Patnaik and his West Bengal counterpart Mamata Banerjee over the phone to review the preparedness for said cyclone. Prior to this, Prime Minister Narendra Modi, on Monday, May 18, had chaired a ‘high-level meeting’ to review the response measures and preparedness to tackle the storm.

Reviewed the preparedness regarding the situation due to cyclone ‘Amphan.’ The response measures as well as evacuation plans were discussed. I pray for everyone's safety and assure all possible support from the Central Government. https://t.co/VJGCRE7jBO

8. The Indian Meteorological Department had earlier warned of ‘flying objects, uprooting of electricity poles and boats getting torn away’. The department added that ‘a storm surge of a height of about four-six metres above the astronomical tide will inundate the low-lying coastal areas in Bengal’.