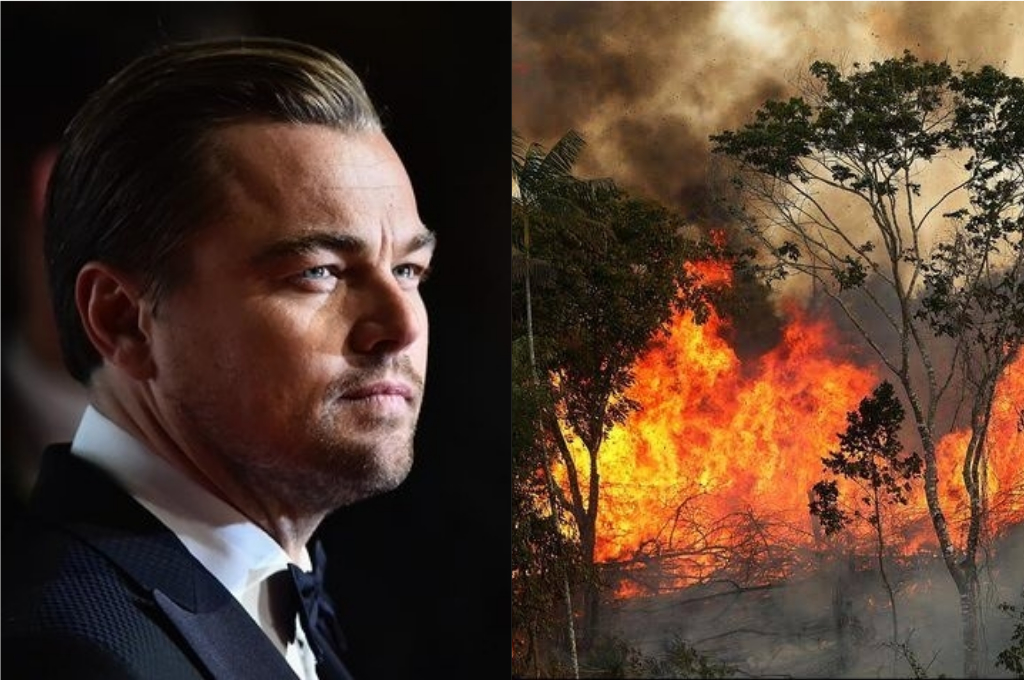 Leo DiCaprio Donates $5 Million To Amazon Rainforest Fund, As Celebrities Unite Globally For The Cause

“Climate change is not hysteria- it’s a fact”! And the rich don’t always ruin the environment, some are also climate champions. Even that’s a fact!

Climate change is real and the whole world has come in terms with it. While various campaigns and activities are going on everywhere to combat global warming, a little bit of influence from the influencers never hurt. And that’s exactly what Oscar winner Leonardo DiCaprio is trying prove!

#EarthAlliance, launched in July by @LeonardoDiCaprio, Laurene Powell Jobs, and Brian Sheth, has formed an emergency Amazon Forest Fund with a commitment of $5 million dollars to focus critical resources for indigenous communities and other local partners working to protect the life-sustaining biodiversity of the Amazon against the surge of fires currently burning across the region. Join Us. 100 percent of your donation will go to partners who are working on the ground to protect the Amazon. Earth Alliance is committed to helping protect the natural world. We are deeply concerned about the ongoing crisis in the Amazon, which highlights the delicate balance of climate, biodiversity, and the wellbeing of indigenous peoples. To learn more or to donate, please visit ealliance.org/amazonfund (see link in bio). Photos: @chamiltonjames, @danielbeltraphoto 2017

An ecological catastrophe has gripped the ‘lungs’ of the our planet, and outspoken climate activist Leonardo DiCaprio has helped raise $5 million to help extinguish fires blazing in Brazil’s Amazon rainforest. The actor’s foundation, Earth Alliance, has donated the money to five local organizations that are directly helping control the blaze. The Alliance was started by the actor in collaboration with business investors and  philanthropists Laurene Powell Jobs, wife of the late Steve Jobs, and Brian Sheth. The organization announced on Instagram that the Amazon Forest Fund, which they say will distribute donations “directly to local partners and the indigenous communities protecting the Amazon,” including the Instituto Associação Floresta Protegida and the Coordination of the Indigenous Organizations of the Brazilian Amazon, among others.

READ: Amazonian Rainforest Is Burning, And Here’s How You Can Help Save It

Other A-list celebrities are also donating and voicing their concern for the fires, with some calling out Brazilian President Jair Bolsonaro for downplaying the impact of the fires. Madonna wrote on Instagram, “President Bolsonaro please change your policies and help not only your country but the entire planet. No economic development is more important than protecting this land. We need to WAKE -UP!!”

The Fires Are Raging and The Amazonia continues to burn………This is a devastation to Brazil—to the indigenous people who live there and the-plant and animal species that make this the most important bio-diverse Forest!!! President Bolsonaro please change your policies and help not only your country but the entire planet. No economic development is more important than protecting this land. 🙏🏼 we need to WAKE -UP!! The future of the rainforest affects the future of the world! 🌎🌏🌍 #prayforamazonia #amazonrainforest #brazil #wakeup

Kim Kardashian added a screenshot of DiCaprio’s post to her story, with the caption, “Does anyone know what we can do to help?” Queer Eye‘s Bobby Berk wrote, “These lands are being set on fire deliberately in order to clear lands for animal agriculture. Reducing your meat consumption is one action you can take on a personal level to lessen the need for more open lands.”

The lungs of our planet are currently on fire. The Amazon Rain forest produces 20% of our entire planets oxygen and it’s currently burning at a rate of 1.5 soccer fields a minute. Without vegetation to protect the land, scientist predict the rainforest will turn into a desert the likes of the Sahara. Think there is nothing you can do to help? Think again! Help buy land in the rain forest so that we can protect it even when the Brazilain government will not. These lands are being set on fire deliberately in order to clear lands for animal agriculture. Reducing your meat consumption is one action you can take on a personal level to lessen the need for more open lands. Visit @rainforesttrust to learn more. You can also reduce your paper/wood consumption or ensure you buy rainforest safe products. 🌳 🍃 Donate money to @amazonwatch for the fight against climate change or adopt a jungle animal through @wwf or @world_wildlife #amazon #amazonfire #amazonfires #rainforest #amazonrainforestfire #climatechange #brazil

Even Ellen Degeneres tweeted, “I don’t know a lot about science, but I do know that allowing massive destruction of the #AmazonRainForest is terrible. Here are some ideas how to help.”

I don’t know a lot about science, but I do know that allowing massive destruction of the #AmazonRainforest is terrible. Here are some ideas how to help. https://t.co/8DNE9Nu9F9

Demi Lovato, Ariana Grande, Kris Jenner, Cristiano Ronaldo, Jennifer Lopez, Shakira and P. Diddy are some of the other celebrities that have used their large fan base to sound an alarm on the issue and encourage donations to help in relief work. The Amazonian fires are currently still raging, so if you want to step up, now would really be the time.