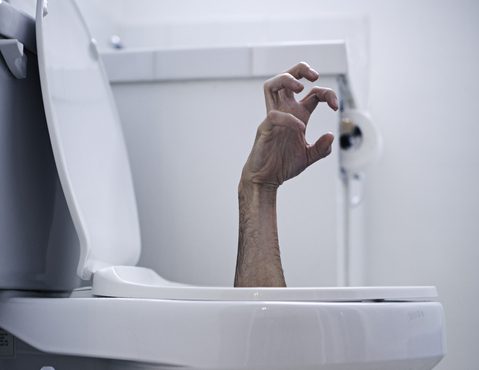 Man Gets Hand Stuck Inside Toilet For Hours, Firemen Come To The Rescue

Here’s a horror story that does not star a witch but an Indian-style toilet. A 29-year-old cab driver spent over one hour and twenty minutes inside a fuel station lavatory in Madurai with his right hand stuck inside the toilet.

The Thanjavur resident was trying to recover his car’s key that had accidentally fallen into the toilet when his hand got stuck.  According to firemen who rescued him, the man was returning home after dropping off his customers. Around 5 am, he stopped by a fuel station along the Madurai Bypass Road to take a dump.

He was about to leave when his car’s key fell into the toilet. When he tried to get it out, his hand touched a cell phone that had ended up inside the toilet earlier. Believing that the key was behind the cell phone down the pipe, he pushed his hand deeper. “When he tried to pull his hand out, he could not. Leaving the key and the cell phone, he tried again, but in vain. We believe his hand got ‘air locked’,” said Station House Officer of Madurai Fire and Rescue Service Station Venkadesan.

After 20 minutes of no luck, the man decided to ask for help. However, there was no around to hear him shout. In the end, he managed to push the door open using his legs as he waited for someone to pass by.