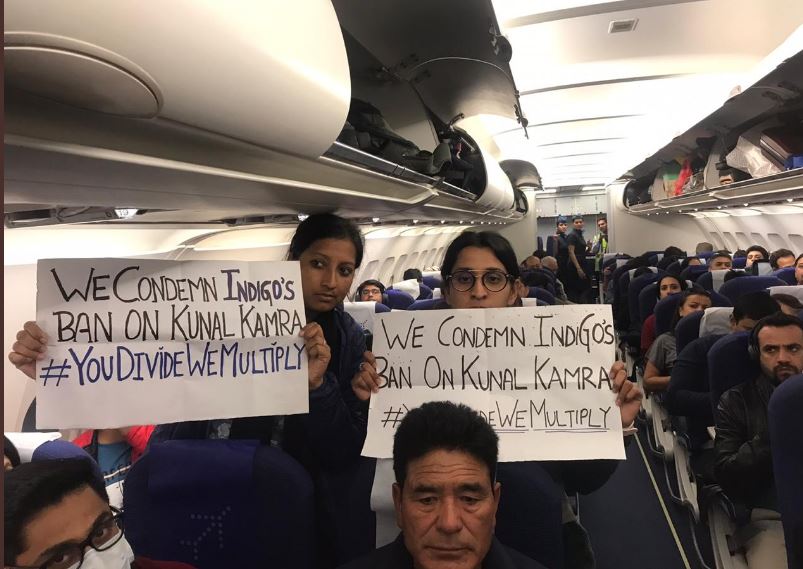 The revolution is feminine

There is mass fervour in the nation, and some would say it is singlehandedly being spearheaded by women whether they are leading marches or sitting peacefully in Shaheen Bagh, and now two women passengers stood up, in solidarity with Kunal Kamra.  When Indigo Airlines banned comedian Kunal Kamra for reportedly heckling television anchor Arnab Goswami on flight, multiple airlines followed suit. What ensued was the aam junta visibly affected and thus started the protests. What started off as film director Anurag Kashyap boycotting Indigo in solidarity, resulted in Indigo passengers holding placards in the flight with slogans such as: You Divide We Multiply.

This is the latest form of protest leading up to two months of active protesting against The Citizenship Amendment Act, the violence on students, and the alleged shushing of dissent which has an entire country jolted.

In solidarity with @kunalkamra88 on an IndiGo flight while being compliant with all DGCA passenger guidelines! pic.twitter.com/QEnyoMLcYQ

The internet lauded these women and their courage. One of the women, Medha Kapoor also mentioned that, “No, nobody said a word to us. When security personnel asked us to sit down, we complied. It was very peaceful.” On being asked why they just didn’t boycott the airlines, Kapoor added that: “Our tickets were booked way before the incident happened so we decided to travel one last time and make that count”.

Brilliant as well as courageous.

This is an awesome protest. You both are Rockstars

Want To Propose To Your Lover In An Iconic Way? Well, Here’s A Pizza Shaped Ring For That