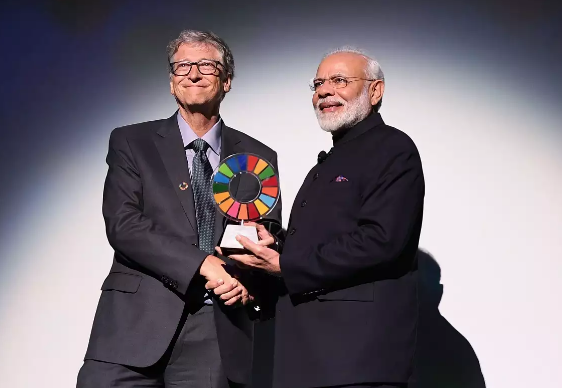 I dedicate the Global Goalkeeper Award, conferred by the @gatesfoundation, to the 130 crore people of India and the collective endeavours of our nation to improve cleanliness.

It makes me most happy that India’s successes in sanitation have helped women and children the most. pic.twitter.com/Va4QKMY3tv

Thankful to the @gatesfoundation for recognising India’s strides in cleanliness. https://t.co/dfE85tPSvE

Feeling thankful, the Prime Minister even took to his Twitter handle to share his experience of receiving the honour. “Gandhiji used to say a village could only become a model when it was completely clean. Today we are heading towards making the entire country a model,” said PM Narendra Modi during his speech. He even dedicated the award to the 130 crore people in India.

According to the Gates Foundation, the ‘Global Goalkeeper Award’ is a “special recognition” that celebrates a political leader who has “demonstrated their commitment to the Global Goals through impactful work in their country and/or globally.”

Earlier, Riz Ahmed and Jameela Jamil, the two actors, had pulled out of the fourth annual GoalKeepers Award ceremony where the prime minister was scheduled to receive the award, in protest to the decision that received sharp criticism with many calling out the Gates Foundation to cancel the award.

BREAKING! This Is The Salman Khan Film That’s Releasing On Eid 2020