NASA’s new study has unveiled never-seen-before secrets of the Solar System. The space agency’s scientists claim that Titan, the largest of Saturn’s 82 confirmed moons and the second largest in our Solar System has multiple surface features similar to that of planet Earth. In the same way that our planet has a water cycle, an atmosphere, dunes, plains and lakes, Saturn’s frigid moon – Titan has methane cycles, liquid lakes, and a diverse terrain spanning its entire surface.

The Cassini spacecraft- a collaborative mission between the American, European and Italian space agencies to study Titan has been stalking Saturn and the moon since October 1997. And for all that talk about Titan being “habitable” and “Earth-like”, recent images from Cassini are proof of a mesmerising resemblance to our home planet that one simply cannot deny. These images show vast plains, dunes of frozen organic material, lakes of liquid methane, illuminating an exotic world considered a strong candidate in the search for life beyond our home planet in the solar system. 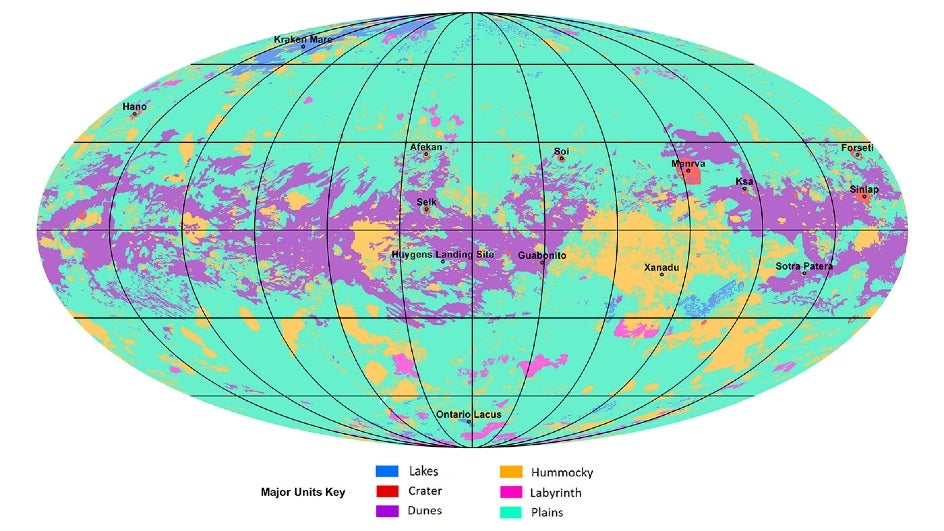 The next mission to Titan will be Dragonfly, which NASA has scheduled to arrive on the wet planet by 2034. The geological map that Cassini has helped piece together comes seven years before the launch of the Dragonfly mission, which is also hosting a multi-rotor drone to study how suitable Titan’s chemistry is for life – human and otherwise.

If there ever comes a day when humans aren’t fit to live on Earth anymore, or the possibility of touring the solar system opens up, here’s hoping the wonderfully weird world of Titan is suitable for life.