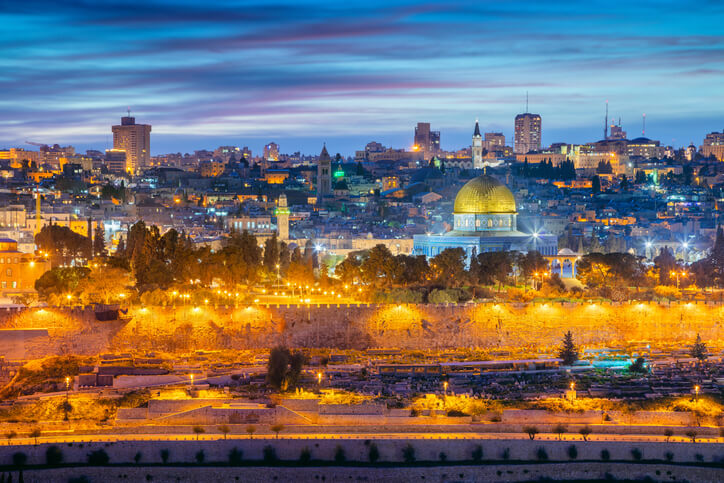 GTTravels: A Guide To The Sacred And Cosmopolitan Israel

Travel brings power and love back into your life- Rumi

My trip to Israel did just that. It reinstated my love for travel and provided me with the feeling of empowerment which you get when you decide to indulge the adventurer in you.

So planning a getaway this summer to witness the sights and sounds of Israel is just the vitamin your soul seeks? Well read on to know why we encourage you to do that!

I landed in Tel Aviv late evening after an 8 hour long stop over in Istanbul, it was Saturday and Shabbat had just got over. I needed to get to Jerusalem and the easiest plus cheapest mode of commute was the sherut or shared taxi. No fuss and super efficient, within an hour I was dropped to my destination.

It was post 11 and the city was alive celebrating Sukkhot; singing, dancing and feasting. The celebration was kind of rejuvenating even when if one was travel weary. 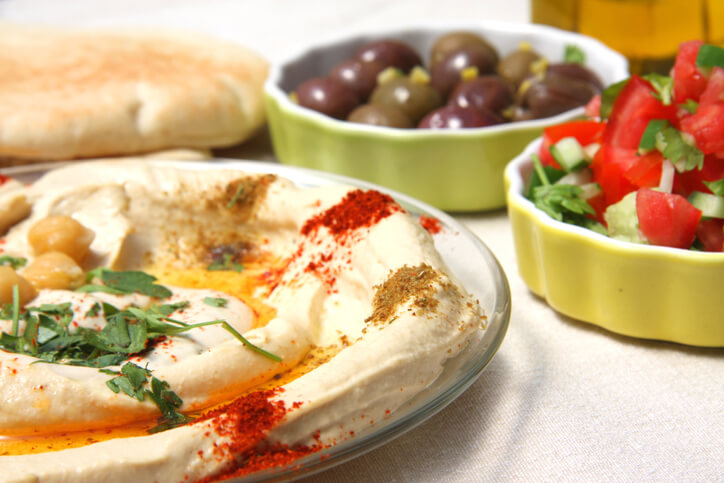 Day 1 -a Sunday morning in the Holy Land. After a hearty Israeli breakfast of breads, hummus, tahini, halloumi , Israeli salad, tuna spread, cheese and pickles, I made my way to the Old City in Jerusalem. Cobbled stone paths, endless winding streets with sepia colored walls, inscriptions and doors. It is hard to miss the colorful stalls selling  fresh and dry fruit, spices, as well as souvenirs such as the evil eye, Hamza, and the carved nativity scenes,. Through this, I made my way to the Via Dolorosa. Yes, this is the path Christ walked on the way to his crucifixion, a sacred route which ends at the Church of the Holy Sepulcher in the Christian quarter.

A pilgrimage site such as the Church is enlightening even for the most unassuming. However, do dress appropriately, and avoid shorts, tank tops or spaghetti straps.

Hungry after the walk, it was just the time and place to tuck into the most popular street food, Shawarma.  I suggest you choose a freshly baked pita pocket or laffa, a soft round bread, then add falafel or your choice of meat, some hummus (by the way if you have had hummus in Israel you will not have it anywhere else) with Turkish or Israeli salad and you are good to go. 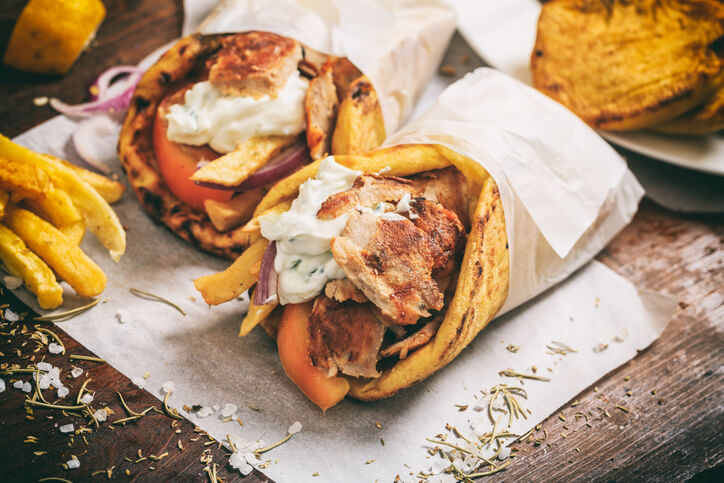 Next stop was the Western Wall where a sea of humanity greets you as a few pray, whereas the rest of us, like me, were jotting down wishes. I could, even, successfully insert a prayer and wish list into the tiny cracks. 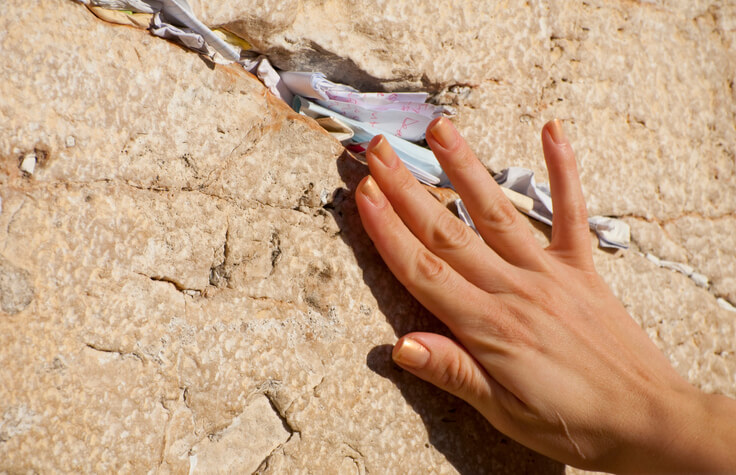 However my day ended on a very solemn note, with a visit to the Holocaust Museum, the Yad Vashem. 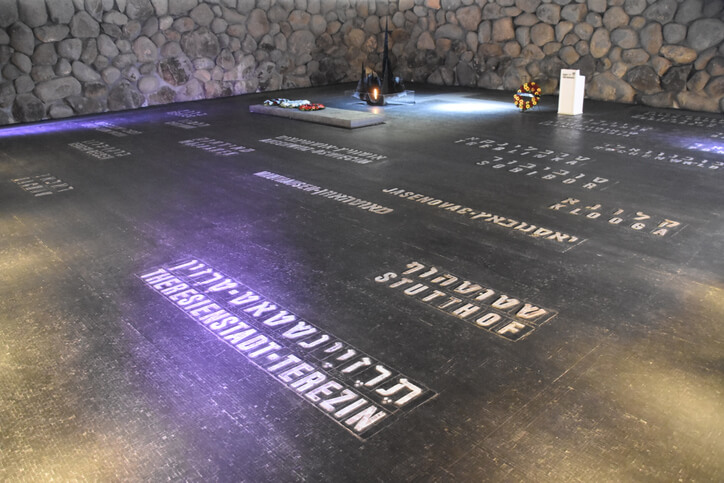 Day 2, I booked myself on a trip to Bethlehem, but the journey is not as simple as it seems. Bethlehem is under Palestinian control best advised to book yourself on a private tour. 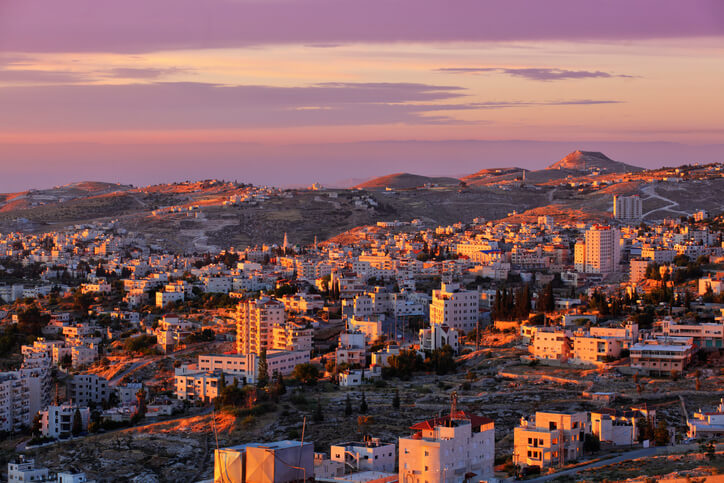 Driving through the West Bank, the graffiti on the wall you cannot not miss West Bank’s answer to the Waldorf, The Walled Off Hotel. You will even spot a Stars and Bucks Cafe  as one winds their way to the ‘Little town of Bethlehem’. 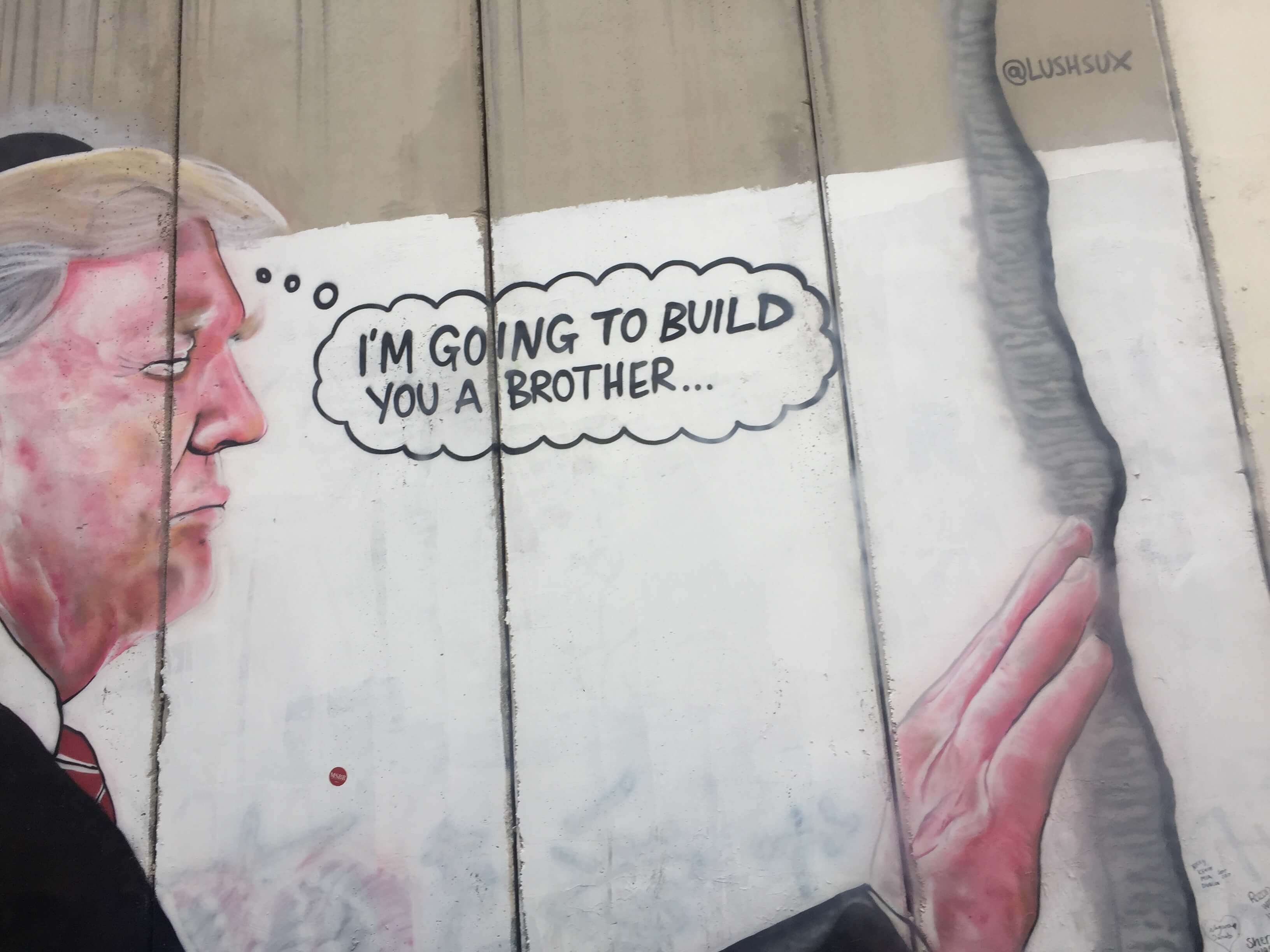 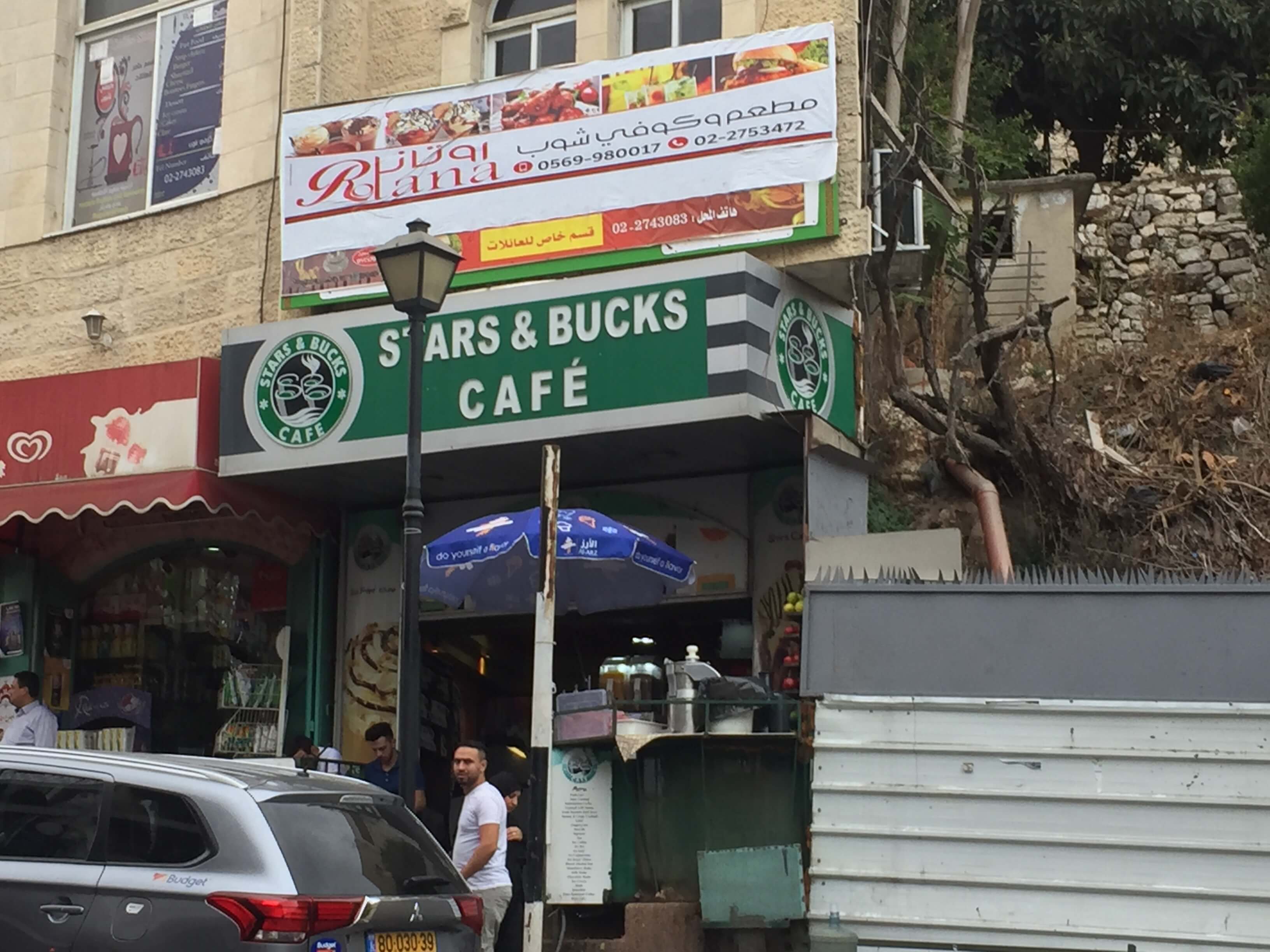 My first stop was the Manger Square which is flanked by the Church of Nativity on one side and the Mosque of Omar on the other. The Church  contains the grotto where Jesus was born and is not only restricted to Christians but travellers from all over the world. 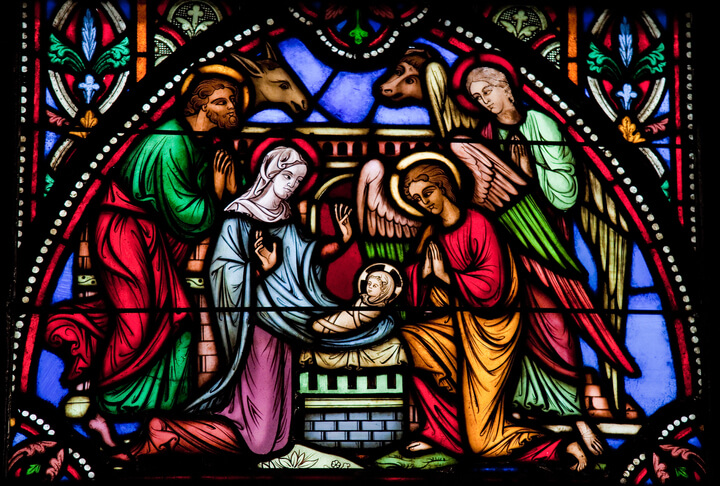 From Bethlehem we were on our way to Jericho, making a brief stop over at the Shepherds’ Field; yes the place the angel announced the birth of Jesus as per the gospel of Luke.  A quick break for lunch and finally Jericho!  Located near the Jordan River, its said to be one of the earliest continuous settlements in the world. Though it’s of archaeological significance, to be honest you can skip it, there is nothing you would have missed. Ah, yes but whilst in the West Bank area don’t forget to buy dates- juicy and sweet- they are of the best quality. 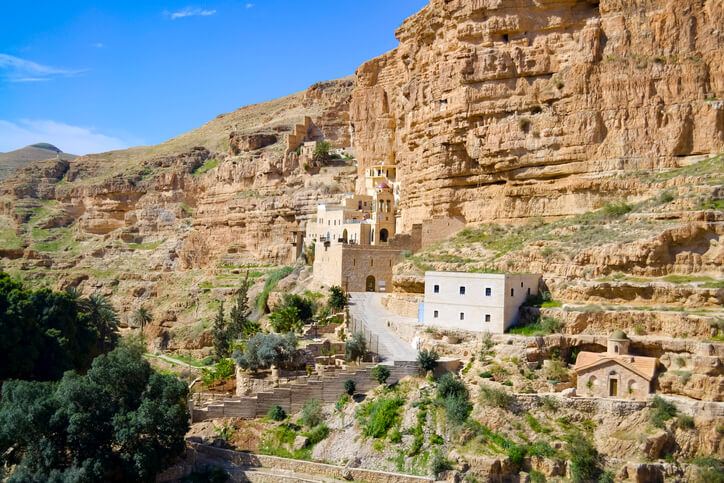 Making our way back to Jerusalem, it was still early evening and with the city still celebrating, I decided to visit the Mahane Yehuda market. Colorful, vibrant, heady, Mahane Yehuda is the largest market or shuk in Jersusalem with over 250 vendors. It’s a foodies paradise, stalls selling fruits, dry fruits ( you get a good bargain and quality) the famous Baklava, and as for the cookies do try the Mandlebrots, the Israeli version of the biscotti with candied fruit. My sweet tooth got the better of me and I began my sample tour of the Israeli Halva from the regular sesame flavor to the dark chocolate and sea salt, to coffee beans, even Nutella and a Jack Daniels flavor! You could even opt for a food tour or browse through more stalls selling mountains of spices, freshly baked bread, mouth watering array of food and yes even accessories. 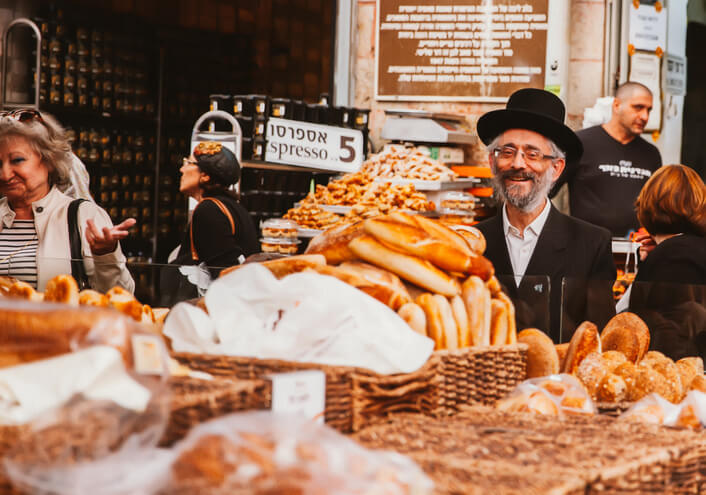 Day 3 dawned early a trip to Masada and yes The Dead Sea. Masada, a rugged natural fortress in the Judean Desert overlooks the Dead Sea. This includes an exploration of the ruins King Herod’s Palace, the Roman style bath house, and the sun beating down on our faces, so don’t forget to carry a water bottle. 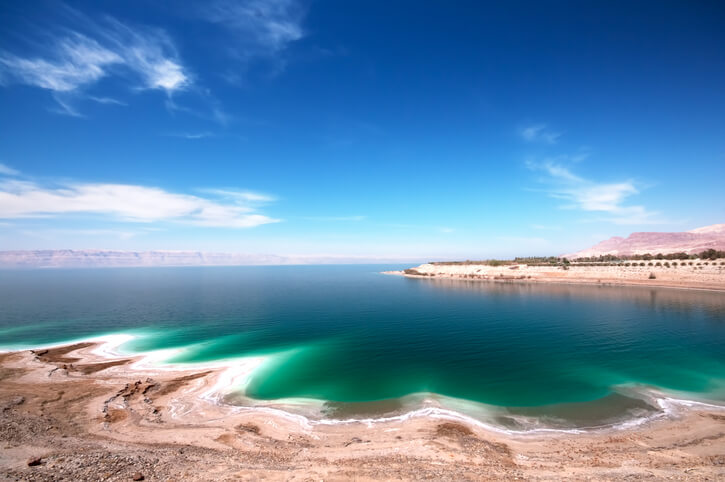 To experience Dead Sea was to afloat on the saline water and get some natural spa like experience. It was crowded with tourists but no one does mind since you can close your eyes and shut out the sound as you float on the water. As few take some of the Dead Sea mud in bottles or indulge yourself in the many Dead Sea Products, you shouldn’t forget to have a coffee slushy there; it’s cooling, sweet and heavenly!

Day 4 as I packed my bags to head out to Tel Aviv, I took some time to explore the colourful streets of Jerusalem, with tiny shops selling ceramics, pottery, works of art, and some funky accessories! Plus don’t forget to eat some more Shawarma here. 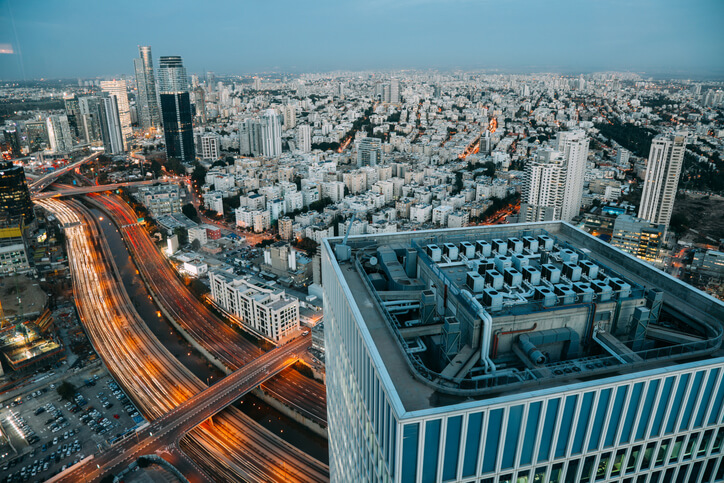 Arriving in Tel Aviv late afternoon, as I walked down the bustling Dizengoff street dotted with cafés,  I was surprised to hear the strains of Dard e Dil playing out from one of the café’s. Making my way through the sun dappled boulevard it was time for some sand, sea and a scenic walk down the bustling Tel Aviv Jaffa promenade breathing in the fresh salty air of the Mediterranean. It’s a 6 km stretch with Old Jaffa visible on the horizon to the south and city’s skyscrapers to the north. It’s nothing short of enchanting, and you can cycle on the boardwalk, walk, take a run along the shore or just sit and watch as the sun sets and Tel Aviv’s night life gets into the swing of things. 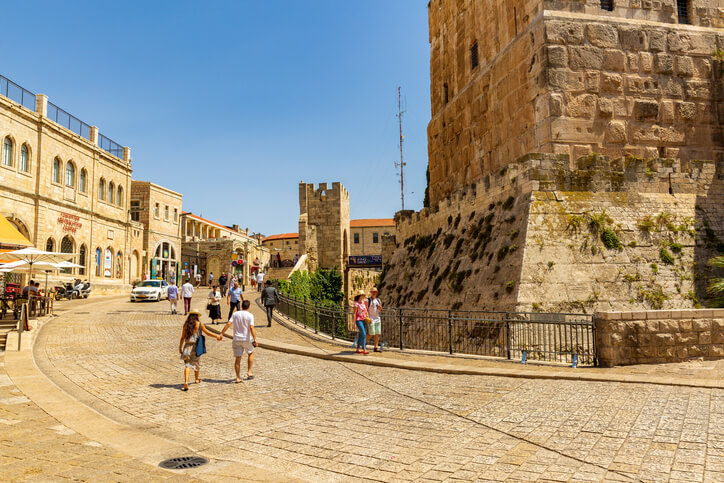 Day 5 was a visit to meet friends at Haifa, known for it’s pretty beaches and of course the Baha’I temple. My Israeli friend Moshe, who is the biggest fan of Amitabh Bachchan, has perhaps the largest collection of not only Bachchan films but Hindi films even managing to get a cable network which streams Indian films. The hospitality of the locals only proved how open and welcoming Israeli are towards Indians. No wonder Israel is now the destination for all things Bollywood it’s untapped locations making their way into Indian films. 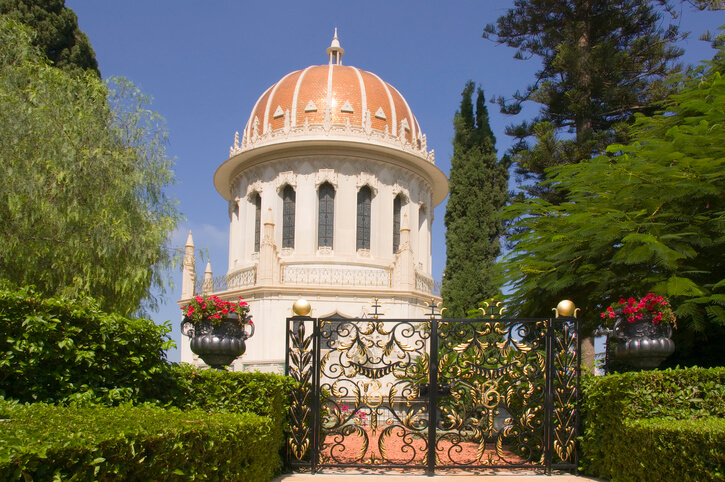 Day 6 and my last day was spent taking a walk down the Promenade and exploring the old city of Jaffa, which entwines antiquity and modernity. I walked down the small alleys which were walked by so many before from the Egyptians to the Romans to the Turkish Sultans. If you visit the Shuk Hacarmel, or explore the Arab market you might get a great antique bargain, stop and pick up a freshly made laffah and sprinkled with zataar and have one of those frozen coffees and work your appetite walking around. The old town is a gastronome delight, so indulge in some of Israel’s famous dishes and expend the calories by walking some more. 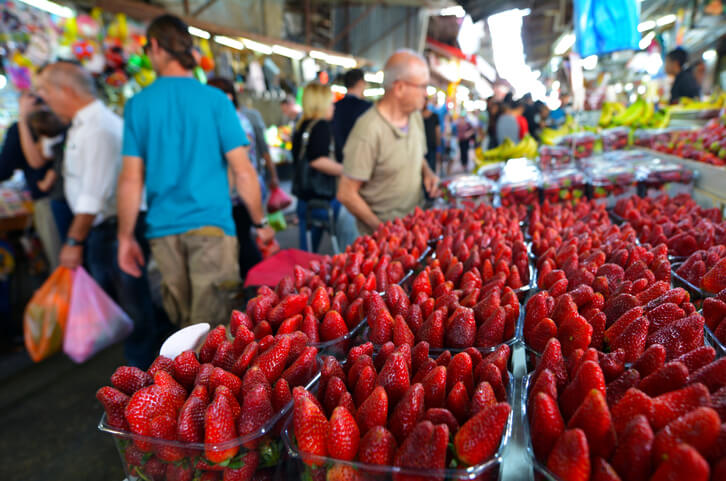 It was Shabbat on my last and final day in Tel Aviv, and the city wore a deserted look, but a few café’s were open and you could relax over coffee or walk down the beach. One word of advise though, on your way to the airport make sure you get there a bit early since security is stringent. So as it was time to say goodbye with the promise to visit yet again!

Bacon To Spinach, All The Different Toppings That Make Stuffed Mushrooms The Best Party Dish